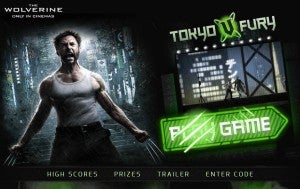 Remember how Man of Steel made most of its budget back through deals with sponsors, product tie-ins and product placement before the movie ever opened in theaters?

Well, it seems some of our other masked avengers are getting in on the act, too, as both The Lone Ranger (out today) and The Wolverine (out in about three weeks) released free-to-play online games tied in with their corporate sponsors in the last day or so.

They're both pretty basic, flash-based games and while The Wolverine's is far superior in graphics and gameplay, The Lone Ranger's gives you a chance to win free stuff at Subway.

V - Energy: Tokyo Fury takes fans to the streets of Tokyo, where Wolverine engages in side-scrolling, bloodless combat with ninja warriors and more.

And in Save the Fresh Express, Subway challenges you to run along the top of a train (not as easy as it sounds, folks!) and prevent burger joint thugs from derailing a train bringing fresh ingredients to the local Subway.

And, without a hint of irony, you can be injured by high-fat fast food items like french fries but are restored by Subway menu items like subs, avocado...and big, plastic cups of Coca-Cola products.

The Wolverine, The Lone Ranger Get Food-Themed Online Games