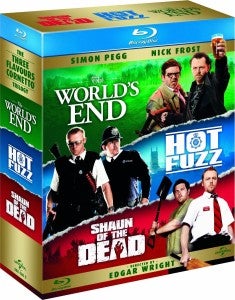 --the final chapter of director Edgar Wright's Three Flavours Cornetto trilogy--will be released to Blu-ray and DVD on November 19, Amazon reports (and star Simon Pegg confirmed today on his website).

At the same time, a box set comprised of all three films in the trilogy will also be available for about $20 more, retailing at $44.99 on Amazon while just the last film is $23.99.

Below, you can find a listing of the many special features expected to be released on the 2-disc Blu-ray special edition of The World's End, according to one Amazon reviewer.