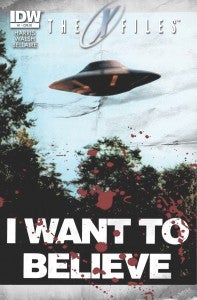 creator and executive producer Chris Carter will oversee a continuation of the series in comic book form, launching on June 19 in the form of IDW Publishing's The X-Files: Season 10. Following in the footsteps of successful series for Buffy the Vampire Slayer and Smallville, both of which picked up from where their respective series left off, The X-Files: Season 10 will be written by Great Pacific's Joe Harris with art and colors by the Comeback team of artist Michael Walsh and colorist Jordie Bellaire. Issue #1 will feature covers by Dave Johnson, Joe Corroney, and Carlos Valenzuela, along with a "classic photo image of Mulder and Scully," says the publisher, who are producing the comic in cooperation with Twentieth Century Fox Consumer Products. "It was already an incredibly exciting prospect to tell stories set after the second The X-Files movie, especially after Joe Harris worked up such a great plan in that regard," said Chris Ryall, IDW's Chief Creative Officer/Editor-in-Chief. "But my excitement level went off the charts after a meeting with Chris Carter, where he agreed to come aboard and executive produce our Season 10. In much the same way Joss Whedon steered our Angel: After the Fall series, Chris has graciously returned to do the same here. What do The X-Files look like in this increasingly paranoid and untrusting post-Wikileaks era? Well, they look like canon to me… and come June, the rest of the world will be able to see it for themselves, too." According to the publisher, here's a nutshell synopsis of the project:

In the opening story arc, "Believers," readers will catch up with Dana Scully and Fox Mulder, living normal lives together under secret identities. However, a visit from an old friend threatens to rip them from suburban anonymity, as they learn that someone is preying upon everyone involved in the X-files. Prepare to revisit familiar faces—some very unexpected, threats old and new, and an intriguing mystery designed to return the beloved franchise to its former glory!

The X-Files: Season Ten Announced From IDW Publishing and Fox