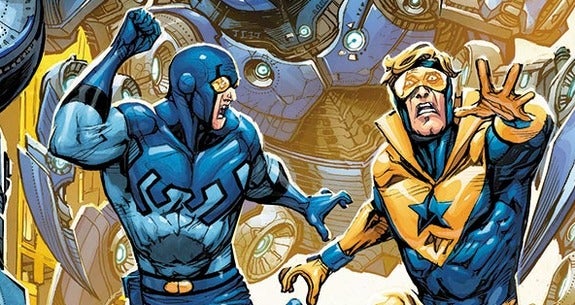 Before Convergence was announced and DC Comics revealed that they were going to start playing with their Multiverse in a very big way, Keith Giffen and J.M. DeMatteis revealed that they planned to bring Blue Beetle Ted Kord and the pre-Flashpoint Booster Gold into their title, Justice League 3000.

That issue hit the stands less than 24 hours ago, and there were quite a few clues as to the nature of the world this version of Beetle and Booster came from contained within.

Could we see this world pop up in The Multiversity, Convergence or elsewhere? Who knows...but if we do, here are some things we know about it. 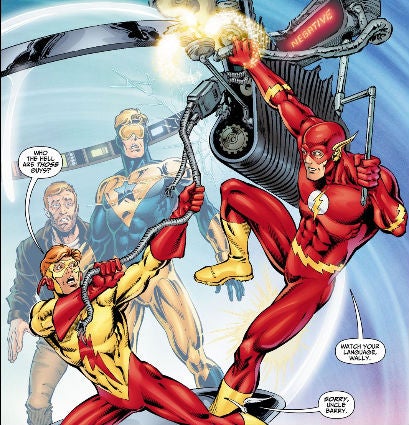 This coming from the guy who once crashed a Time Sphere into the Cosmic Treadmill while drunk!

...Okay, well, that was like 2 minutes after he had to drink Jonah Hex under the table to prevent a paradox that would have stopped Superman from existing...but still! 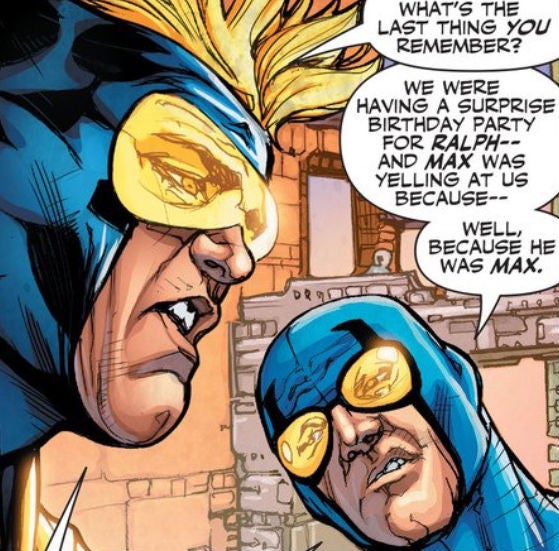 This version of Beetle and Booster hail from a world where Ralph Dibny, The Enlongated Man, was still alive when they left.

...which, really, should be pretty obvious becuase Beetle is alive. Still, the fact that Max Lord was hanging with the Super Buddies when they left tells us a lot about the nature of the reality in which this book is set.

Apparently, that just never gets old. I think they started that joke in Booster Gold Volume 1, and it's one of the rare items that Giffen, DeMatteis, Jurgens and Johns -- every major writer to work on Booster -- has carried through. 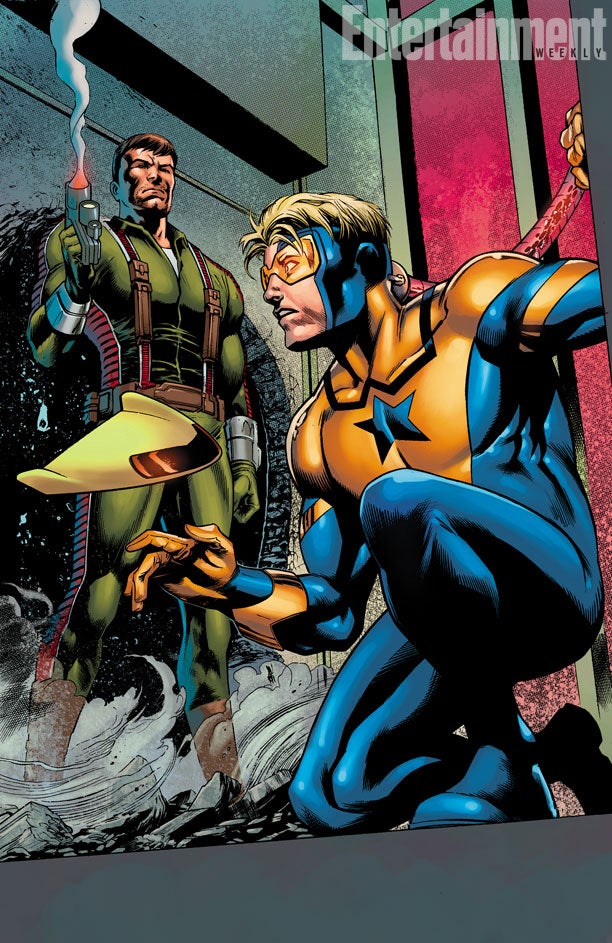 Skeets is out of commission

Why? Well, that's often been a question for hardcore Booster Gold fans. Back in 2010, DeMatteis gave me a surprising answer:

"Can I be honest? Back when we were writing the original JLI series, I knew absolutely nothing about Booster's history," DeMatteis said. "I'd never even heard of Skeets, so I didn't know his not being there was even an issue!"

Fear not, dear reader. If you're a fan of Skeets, you can see him (and Rip Hunter, Booster's son and mentor -- time travel is weird!) in Convergence: Booster Gold, coming in April. You can see the cover for the first issue at right.

This Booster married the wealthy heiress

Even though Dan Jurgens' iteration of the character took the "Gladys" story out of continuity, she's back now!

And that doesn't' conflict with anything because, again, this is the Giffenverse.

"'Lie' would be too strong. Booster simply 'punked' Ted," Jurgens explained to me back in 2010 when he had Booster reveal that the Gladys story was a joke. "I think that's perfectly consistent with their relationship. Way better than hanging a 'kick me' sign on the Martian Manhunter's cape. Actually, my take on it is that it was a line of BS Booster was shoveling because he really had gotten a JOB. He was a working stiff and that would be the worst way to explain himself. So he came up with something sort of 'in character' to cover himself, while still being something he wouldn't do."

Unlike the one he wore during Booster Gold Volume 2 and in his brief appearances in the New 52, Booster Gold's costume in this issue doesn't have the ability to travel through time.

...Or much else. For all intents and purposes, it appears to be just tights and goggles, with the force field and Legion flight ring stripped away before Booster was recovered from cryo-freeze.