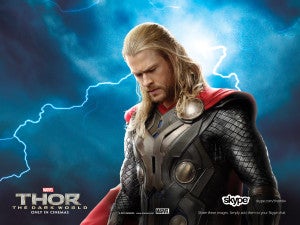 Skype are hosting an online chat with Marvel Studios co-president Kevin Feige and Thor: The Dark World actors Chris Hemsworth and Tom Hiddleston, and they're looking for fans to submit questions for the occasion. You can also ask for other members of the cast, and it sounds like they're going to try and make some of those happen.

And they've made not one, but three videos to alert you to the fact. Check them out, embedded below along with the official description. You can message the askcast_thor username on Skype with your question and with a little luck, it'll get used in a video.

There's no specific date; it seems as though they'll be rolling questions out on the official site between now and the release of Thor: The Dark World in 31 days. 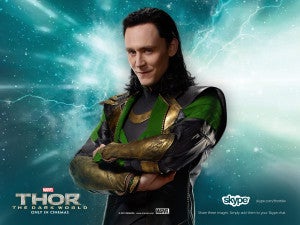 You can also check out the official site for the event here, complete with a link to ask questions.

Are you counting down the days to Marvel's Thor: The Dark World? You can get closer to the action with Skype!

Film maker and Skype Moment Maker Georgia Benjamin shares how you can send the cast and producer of Marvel's Thor: The Dark World your question. What was it like working on the set? What is it really like working with Chris Hemsworth or Natalie Portman?

Kevin Feige is Marvel's Head of Production, producer on Marvel's Thor: The Dark World, and generally in charge of what we see in the Marvel Cinematic Universe now and for the foreseeable future...

Skype and Marvel are giving you the chance to ask him questions about anything within the Nine Realms. Just send Kevin a Skype video message with your question. We'll post a video here of him answering the best ones, before the movie hits screens.

Chris Hemsworth and the cast of Marvel's Thor: The Dark World are answering your questions! What was it like working on the set? What were their favorite scenes to shoot? Ask these and many more by sending in your Skype video message.