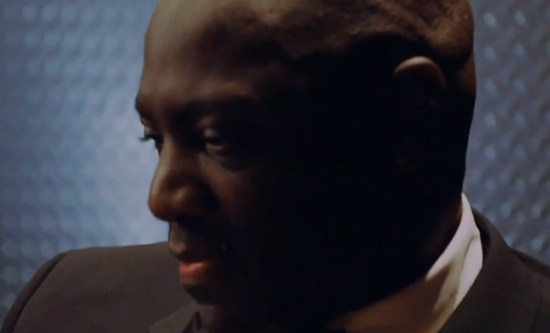 While Adewale Akinnuoye-Agbaje is starring in this week's biggest release--Marvel's comic book adaptation Thor: The Dark World--it isn't his first movie, or even his first comic book movie, of the year.

Akinnuoye-Agbaje appeared a few months ago in Sylvester Stallone's Bullet to the Head, an adaptation of the French-language graphic novel of the same name, directed by Alien and Prometheus producer Walter Hill.

"It was a really enjoyable process to work alongside Walter Hill and Stallone because they were very keen to develop a multi-layered and textured character," the actor told ComicBook.com at the time. "Certainly with Morel, they were not interested in a stereotype which is why I think they cast me. We made the character originally African who moved to America–and we made him a cripple, which automatically gives him multi-layered dimensions. I think that’s what they were looking for in a high-impact action film. When you watch the movie, you’ll see even though there’s a lot going on with action and shooting, each character has his own true arc. You get to feel them within that ninety minutes, which I think is a real accomplishment for that genre."

Hill's film rated a mere 46% on Rotten Tomatoes (still not the worst-reviewed comic book movie of the year, since Kick-Ass 2 has a 30%), but we asked Akinnuoye-Agbaje what he thought of the movie, now that he's not quite so close to it and isn't actively promoting it, and he agreed, saying that "It worked for me, too."

"I really enjoyed working with Walter Hill," Akinnuoye-Agbaje said. "He's fantastic. I had a great time on that picture."

Thor: The Dark World's Adewale Akinnuoye-Agbaje on Bullet to the Head: It Worked For Me