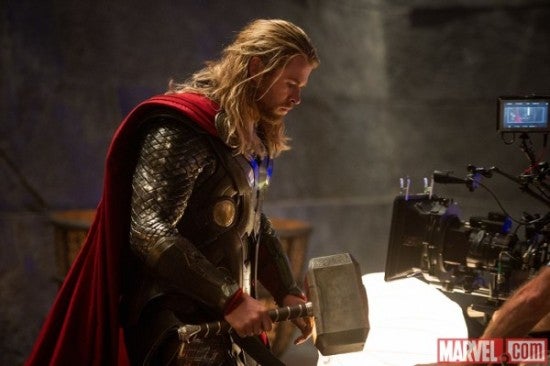 It looks like Robert Downey, Jr.'s contract for three solo films and three Avengers movies (plus/minus the cameos) is about what Marvel wants out of their stars; as part of the promotional campaign for Thor: The Dark World, star Chris Hemsworth was asked about his current deal and told reporters that he's signed for one more Thor movie and two more Avengers films, reports Comic Book Movie.

"I've got three left in my contract," Hemsworth told Access Hollywood in an interview embedded below. "From here on, I have two more Avengers and one more Thor and if people wanted to see more, I'd be happy to keep going. I love these stories and I love this character. The opportunity has opened up everything for me."

Certainly his eagerness to continue as Thor and the fact that he's about 18 years younger that Downey gives Hemsworth some room to grow in the Marvel Universe; in fact, nearly everyone involved with the non-Iron Man films is under forty, something that could theoretically keep most of The Avengers intact well into Phase Four or Five of the Cinematic Universe, by which time the studio theoretically would have built up some other characters who can tag in, assuming the movies are still doing the kind of money that require additional sequels.