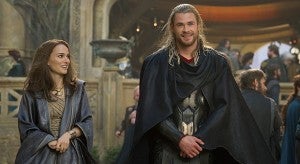 Natalie Portman, who plays love interest Jane Foster in Thor: The Dark World, told Static Multimedia in a newly-released interview that it's a bit of a bummer she got the part--because now she can't play a superhero elsewhere in the Marvel Cinematic Universe.

"I think I blew it. Because once you are Jane, then you are like, ‘Oh my God, I am a superhero over here,’ then you can’t be another character in a Marvel movie," the Star Wars prequels actress admitted. "I don’t know, maybe Jane can have an alter-ego."

Her character is acting a bit more super this time around, though; rather than just being arm candy who occasionally fiddles with a knob while her boss does most of the scientific heavy lifting, we see Jane head to Asgard, where she acts as an intermediary between Earth and Thor's kingdom.

"She’s really helping. But not in like a physical superhero way, but her scientific understanding kind of helps understand what’s going on with the correspondence of different worlds with each other," Portman explained.

Holding her own in a physical superhero way, though, may not be a concern, either; she thinks she hurt Loki. "It was actually a punch," Portman said of the shack she gave Tom Hiddleston's villain (as seen in the trailers). "We did a few that were fake, but they could tell because I am just bad at that. (laughs) So there were a few real ones because they were like, ‘you are just a little girl, you really can’t hurt him’. So I don’t know, he acted like he could handle it, but I think I actually hurt him."

Thor: The Dark World's Natalie Portman Kinda Wishes She Could Play a Superhero