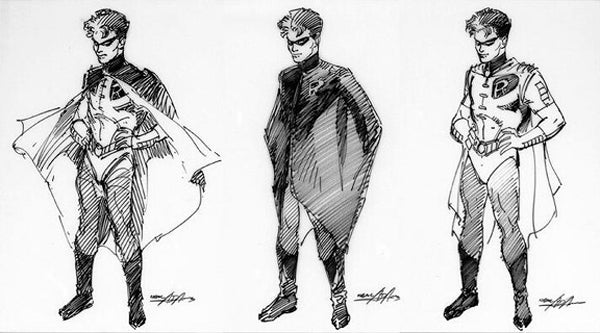 Scaly underpants and pixie boots: They don't exactly scream "practical" when embarking on a lifelong war against crime. And yet, those garish garments would define Robin, the Boy Wonder's costume for almost 50 years. As Robin, and his costume, appeared across several media, toys, merchandising, and more, no one ever seems to stop and think that an update was in order.

That all changed in 1989, when DC Comics and its parent company, Warner Bros., found itself with the juggernaut that was Tim Burton's Batman film. With Batman dominating pop culture in ways not seen since 1966, Warner Bros. knew that whenever Robin entered their franchise, he would need the right duds. Green pixie boots must not have polled well with focus groups. Meanwhile, at DC Comics, the publisher was readying readers for their debut of the third Robin, Tim Drake. Unsurprisingly, DC was equally-ready to dump Robin's fairy tale uniform for something more functional.

With both DC and Warner Bros. in need of a more sophisticated Robin, DC looked to their creators for redesigns. While many submitted proposals, it was Neal Adams—industry veteran and famous Batman illustrator from the seventies—who delivered the winning design. That green-legged, ninja-toed uniform that Tim Drake wore for 17 years turns 25 this month, along with Drake's introduction as the Boy Wonder.

For this week's Throwback Thursday, we chatted with Neal about the redesign process, how he persuaded DC to pay him $12,000 for the design, and how Warner Bros. almost turned Tim Drake into a "Junior Batman." 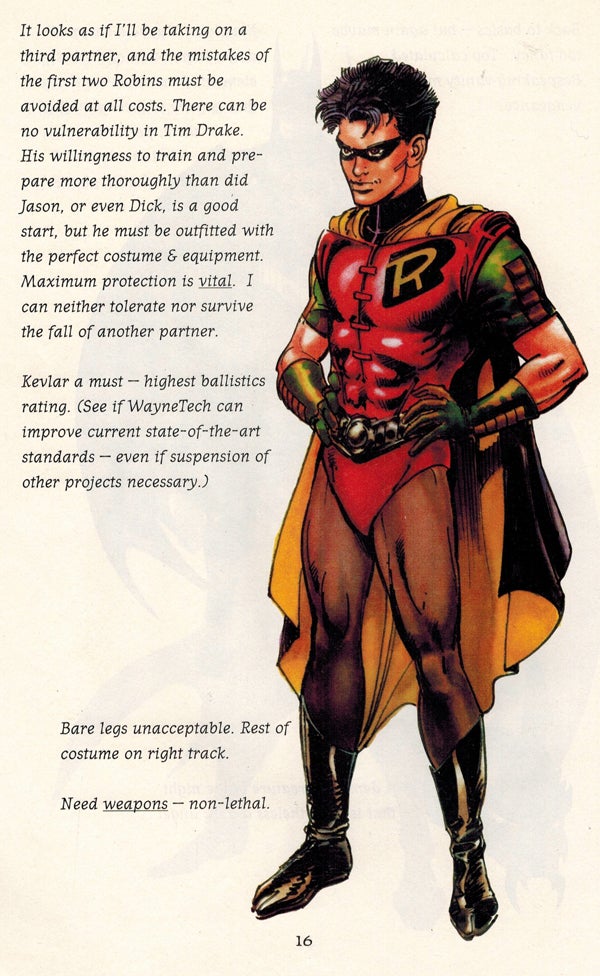 So take us back to 1989. How did DC approach you for redesigning Robin's costume?

It was very clear for years that the old Robin costume was silly. But DC Comics and Warner Bros. were planning to put Robin in Batman feature films, and they needed a costume. There was a discussion back and forth between DC and Warner Bros. as to what they'd put the actor in. They wouldn't put him that silly costume with the bare legs.

An editor from DC called, spoke to my daughter—who runs the studio when I'm not here—and said, 'We'd like Neal to redesign the Robin costume.' We agreed upon a price for a costume design, and I think it was $1000. And then at some point in the conversation, maybe the second for third discussion, DC let it slip that they were having 11 other artists do revisions of Robin's costume.

So, I had her call DC back and tell them that my price had changed to $12,000. I figured that if DC was going to get 12 other people to do it, then they can pay $12,000. Obviously, they felt comfortable laying out $12,000 across 12 different artists. I said if they use my design, they can just pay me $12,000. If they don't use my design, they don't have to pay me anything. They could have it for free. So DC agreed to pay me that amount if they used my design.

Wow. What happened next?

I solved the problem. The project wasn't so much a costume design as it was a problem to solve. The problem was, here's Robin in this yellow cape: A perfect target for anyone who wants to shoot him. So how do you get rid of that target and still give him the iconic yellow cape? My solution was to make the outside of the cape black, and the inside of the cape yellow. At least then, he would have some defense. He could pull the cape over and disappear into the darkness, but still be Robin with the yellow. Then I deepend the red on his chest and torso, and gave him leggings. I also gave him ninja boots. The idea behind the ninja boots was that he was an acrobat, and so he would need something like that. Ninja boots are defined by the pull-in between the first and second toe, so you can grab something with your toes.

Since Batman has all these places to store his materials in his utility belt, I put these areas for storage along Robin's sleeves and along his spine, so he could store his stuff with a certain amount of sense. I just made it a more practical costume.

And I obviously took off the Peter Pan booties, which were silly.

Yeah, the booties had to go. So DC obviously accepted the design, but what were their initial thoughts?

DC loved it, but asked if I could do just one more version of it, and make it darker. I made it quite dark in the last version. But before I sent it over to DC, I had my daughter call them and say "Neal understands what's going on here. What's going on is that Warner Bros. wants to make a "Junior Batman, and what they're really doing with these redesign requests is trying to make you create a Junior Batman." She told them that I'd send a "Junior Batman" design over, but that it doesn't look like Robin anymore. Warner Bros. was a film company, so of course they wanted to make a dark little batman. But DC Comics had licensing out there. They had millions of dollars off of that licensing. Why would they corrupt their own character, and turn him into a Junior Batman, when in fact he was Robin: The Boy Wonder. I recommended that DC didn't turn it over to Warner Bros., because that's exactly the look they'll use in the film. So DC realized that they were being tricked by the film company and never sent the last design over. And of course, they paid me $12,000 for the first design. 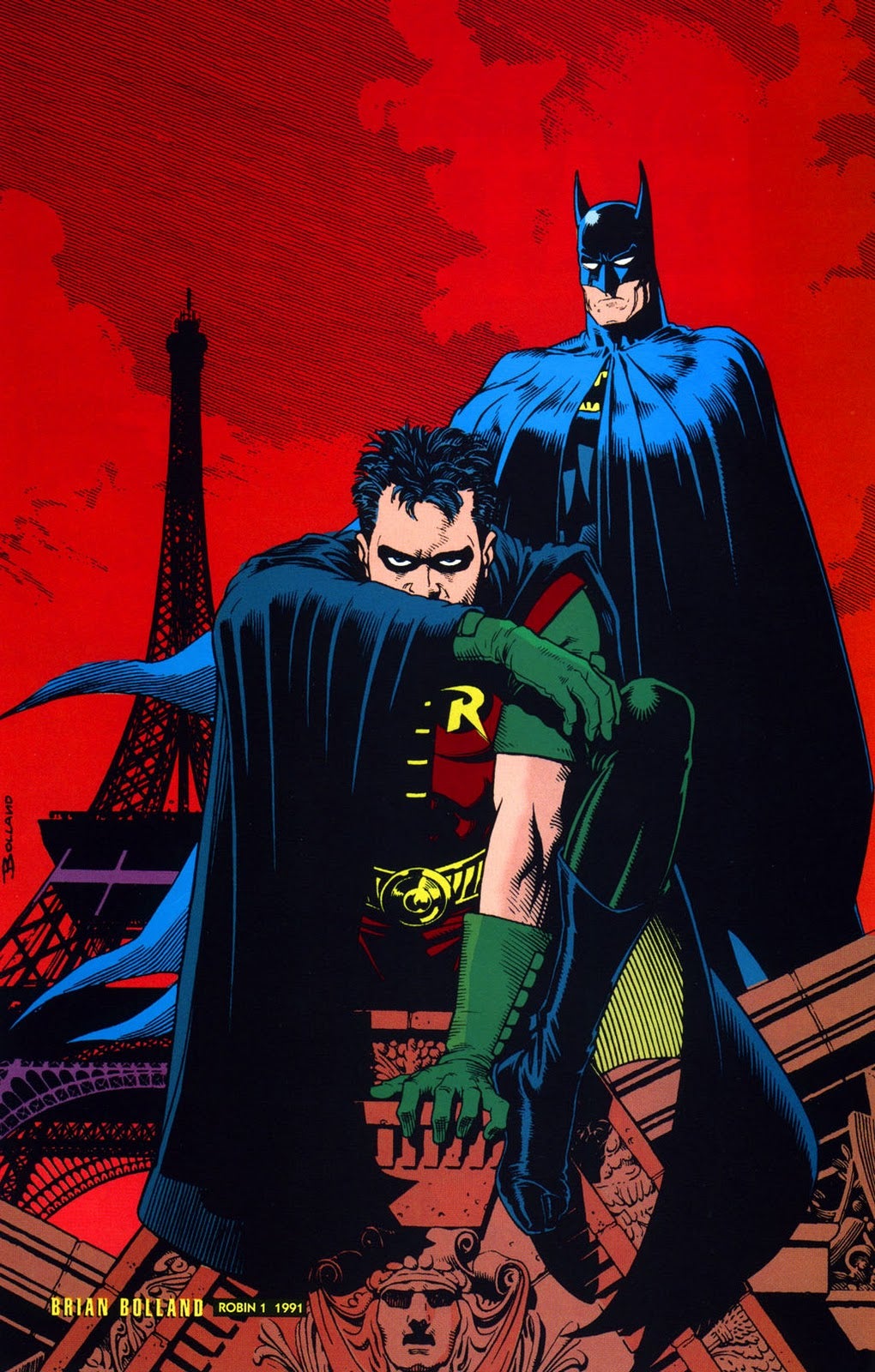 Looking back at the Robin design today, how do you personally compare it to your other comic book designs? What are you particularly proud of with Robin?

When I work on costumes, I try to make them practical. I try to answer the questions that you would naturally ask if you were wearing a costume, like "What would I do with this?" or "How would I take care of that?"

I thought I took a Robin costume that, as a child, I was charmed by, and altered it into something that made sense. He's an acrobat who calls himself Robin. We don't want t make a target out of him, but we still want to keep the costume and take care of the licensing. I also made the costume in such a way that he could hook the cape to his feet and wrists, and glide with it. It was all part of updating the look and bringing it to modern times. I think it works fine for these days, and there aren't any changes that really need to be made. What happens with other artists is that they don't necessarily think about solving the problem, they just make designs.

That makes sense. Thanks so much for sharing that story with us. Before you leave, do you have any other closing thoughts on Robin's costume, or design work?

If you have a film or a play, designing a costume is a whole different process. You can't just draw lines on a naked figure and say "thats a costume." It has to make sense. So I tried to have it make sense, and have be so that anybody could makes changes within the framework of that. I feel like I have an obligation to be responsible for the design, and ensure that it works.

Special thanks to Batman1989 for unearthing the design images.