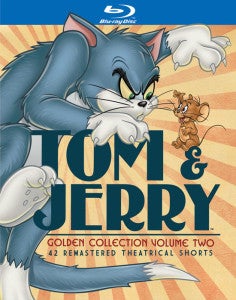 When Warner Bros. recently released Tom & Jerry: Golden Collection Volume 2 to Blu-ray, some fans were disappointed to learn that two of the episodes they expected weren't there.

The episodes in question, “Mouse Cleaning” and “Casanova Cat,” were reportedly removed from the set as Warner was worried they would be perceived as insensitive--Tom and Jerry appear in blackface in the episode. That's something, obviously, that wouldn't fly on kids' entertainment today.

Some fans are upset, though, that by removing the episodes they're whitewashing the history of the popular animation franchise and not giving fans a chance to evaluate the content for themselves, and in the proper historic context.

"Fans will realize they are a product of their time," David Lambert of TVShowsonDVD said. "In the internet age, they cannot possibly be hidden away in any case, so the studio may as well give the fans what they want."

While these two episodes were singled out, racial stereotypes were commonplace in many early episodes of Tom & Jerry, with Tom's owner being a fat, angry, stereotypical woman--first black and later Irish.

Warner Bros., who distribute Tom & Jerry movies, and producers MGM have historically had a hard time knowing exactly how to deal with the content, says the Comic Book Legal Defense Fund.

They quoted The Daily Mail UK, reportin on the story and recalling a previous incident involving Warner's Looney Tunes:

Despite a Warner Brothers spokesman telling the Independent on Sunday that the company felt certain content in the series would be ‘inappropriate’, when a Looney Tunes Golden Collection was released in 2005, actress Whoopi Goldberg was asked to explain why certain episodes were kept in the collection.

She said at the time: "Removing these inexcusable images and jokes from this collection would be the same as saying (these prejudices) never existed. So they are presented here to accurately reflect a part of our history that cannot and should not be ignored."

Loki: Is Sylvie A Real Loki?

PAX West 2021 Will Be an In-Person Event