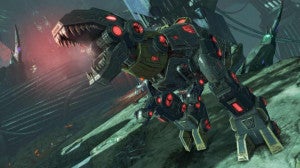 The Dinobots will appear in Transformers 4, producer Lorenzo di Bonaventura confirmed in an interview with The Beijing News.

"I can not disclose the specifics, but you can be sure that the arrival of the Dinobots will give the audience a lot to be excited about," di Bonaventura said. "The world's coolest, most exciting cars will appear in the film, including Chinese vehicles, so whether you are a car enthusiast or not, it will be a feast for the eyes."

The film is also rumored to feature Cyclonus, one of Unicron's minions in the Transformers animated series, although that doesn't necessarily translate to the films even if a character by that name turns up. Michael Bay's live action franchise has so far resembled its source material very little.

A list of possible subtitles for the film were recently revealed by clever folks watching domain registrations, and the di Bonaventura, currently in China promoting the production, has dismissed the idea of an Iron Man 3-style "Chinese cut" that differs significantly from the American version in order to appease foriegn censors.