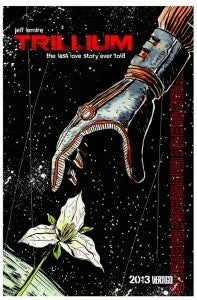 is live at the New York Comic Con, where DC Comics vertigo has just made several big announcements. A new limited series called Trillium will be launched by Vertigo in 2013. Trillium is both written and illustrated by Jeff Lemire. Lemire said, "As Sweet Tooth moved towards its conclusion earlier this year, I started to look ahead to what my next creator-owned project for DC/Vertigo could be. I pitched a number of ideas to editor Mark Doyle that I wasn't totally happy with.  Finally he pushed me to leave my comfort zone, and get away from the genres and themes that I'd become known for. Sci-Fi is something I've wanted to tackle for a while. I experimented a bit with it last year when I did the Ultra The Multi-Alien short story for Vertigo's Strange Adventures anthology and enjoyed that project so much that I was eager to do more. I've also always wanted to do a really powerful, human love story. There have been so few love stories done really well in comics. Preacher and Blankets come to mind as recent successes, but in my mind, it's still a difficult and rather unexplored genre in the comics medium. It seemed like just the kind of challenge Mark was pushing me to undertake. So, I combined these two interests along with my ongoing fascination with in World War 1, and turn of the century exploration, and the results are Trillium." Trillium is actually set in two different time zones. Part of Trillium takes place in the year 3797 and centers around botanist Nika Temsmith. Nika is busy researching a species of strange plant-based life forms on a remote science station near the outermost rim of colonized space. Another part of Trillium is set in the year 1921 and centers around war-scarred explorer William Pike. William leads an expedition into the dense jungles of Peru in search of the fabled "Lost Temple of The Incas," an elusive sanctuary said to have strange healing properties. Even though Nika and William are separated by thousands of years and hundreds of millions of miles, they will fall in love. Unfortunately, their love also results in bringing about the end of the universe. Even though reality is unraveling all around them, nothing can pull them apart. Trillium is being billed as not just a love story, but as the last love story ever told. Lemire added, "It will be my most ambitious creator-owned project and my most challenging. I think fans of my previous work will see traces of both Sweet Tooth and The Underwater Welder in its chemistry, but I really do want to push myself in new directions as well. Trillium is a mind-bending sci-fi thriller about the end of the universe. And, it's a story about the dawn of human exploration and its natural conclusion thousands of years away. But most of all it's a love story. And I can't wait to share it with you." 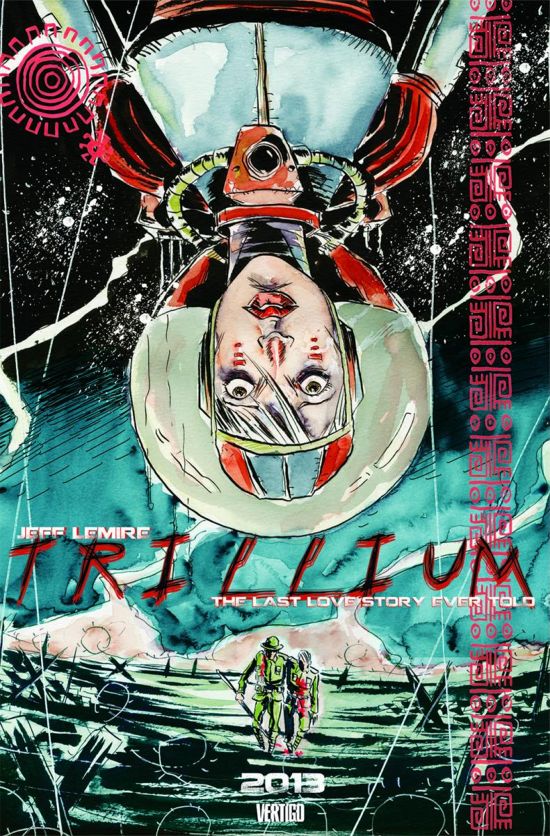