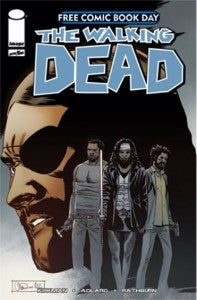 In the midseason finale of The Walking Dead TV series, viewers were introduced to a brand new cast member named Tyreese. Not much was revealed about Tyreese during the "Made To Suffer" episode.

After a member of Tyreese's group was bitten by a walker, he lead his group into the prison. Carl heard Tyreese and his group battling walkers, and he went to help them out. After helping Tyreese's group, Carl locked them up for the safety of his own group.

For TV viewers who want to find out more about Tyreese in the comic books, they will get their chance to next year for free. As part of Free Comic Book Day, Image Comic is providing comic book shops with The Walking Dead Special to giveaway.

The Walking Dead Special will be released on May 4, 2013 as part of Free Comic Book Day.