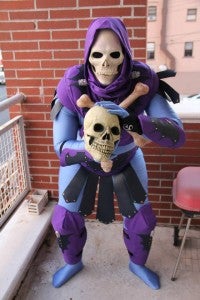 Unemployed Skeletor, the popular Internet-comedy character created by Lava-Roid writer Kevin Conn, returns to YouTube today in a new interview on Internet After Dark. The character, who was retired briefly after damage to the costume forced a hiatus for a redesign, sports a somewhat new look in the video, and teases that he'll be appearing in that transitional look at a couple of comic book conventions before debuting a new look at New York Comic Con. "Why why why don't I tell you which comic conventions I will appear in? I will be appearing at Baltimore Comic-Con THIS WEEKEND September 6th and 7th and 8th," said the He-Man-villain-turned-Internet in-joke. "And RetroCon September 14th in Pennsylvania. And, the big granddaddy of them all, the New York Comic Con in the second week of October. It'll be Skele - eee - great?" After that, he'll be making a triumphant return to his own YouTube channel, where he's been absent for a bit.