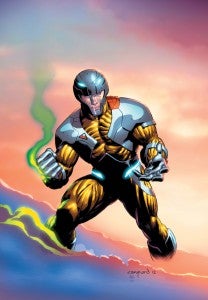 Valiant yesterday announced a variant cover for May's X-O Manowar #1 which is exclusive to direct market subscribers. By series artist Cary Nord, Valiant suggests that all of their upcoming relaunches will feature similar incentives aimed at encouraging fans "to open pull lists at their local comic shop and reward long-term pull list subscribers who pre-order Valiant's new number one issues." "We're committed to getting as many fans of Valiant's original incarnation as possible back into brick-and-mortar comic shops on May 2nd for X-O Manowar #1," said Publisher Fred Pierce in a statement. "There are many lapsed readers out there who haven't visited a store regularly for years, and this limited edition cover is a great way to incentivize the act of opening a pull list subscription with your local retailer. On top of that, it's also a perfect opportunity to get a look at the stunning work Cary Nord is delivering with X-O Manowar." The publisher also says that they'll be shipping preorder forms to retailers throughout March in order to make it easier to track demand for the variants and Valiant's titles in general. Look for an interview with X-O Manowar writer Robert Venditti in this spot soon!

Naruto Creator Treats Jiraiya to a Drink in New Sketch

My Hero Academia Creator Reveals Their Own Take on 'Vigilantes'