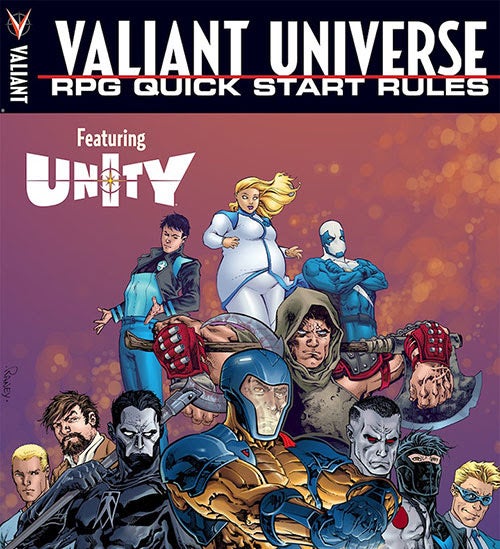 With several releases set to debut during the lead-up to Free RPG Day on June 21, the initiative begins today with the release of Valiant Universe RPG Quick-Start Rules: Unity—recreating the first landmark confrontation between X-O Manowar and Valiant’s premier superteam Unity and available now at www.catalygamelabs.com/valiant and DriveThruRPG.

On May 17th, relive the events of Valiant’s best-selling crossover event, Harbinger Wars, with the Valiant Universe RPG QSR Supplemental: Harbinger Wars (Bloodshot). Grab the rules from the Unity QSR and just plug in these characters and Events for more fun and action!

“From the get-go, Catalyst Game Labs has embraced the digital side of gaming,” said Randall N. Bills, Managing Developer for Catalyst Game Labs. “By preceding the release of the upcoming Valiant Universe RPG on store shelves in August with the release of Valiant comics at DriveThruComics and an unprecedented rollout of QSR content online, we’re adding to the excitement for anxious fans, while ensuring the best possible experience for players interested in checking the game out. It’s been brilliant working with Valiant and DriveThru to bring this together.”

“Already, fans all over the world are clamoring to see what Catalyst has up its sleeve for the Valiant Universe RPG,” said Russell A. Brown, Valiant’s President of Consumer Products, Promotions, and Ad Sales. “These Quick Start previews are a perfect introduction to the nuanced and high-stakes world of Valiant’s indomitable heroes. Whether you’re a longtime fan of Valiant’s characters, or meeting them for the very first time, get ready for a new experience in gameplay unlike anything else out there today.”

Look for print pre-orders and PDF copies of the complete Valiant Universe RPG to debut on July 5th, with the book to follow in August.