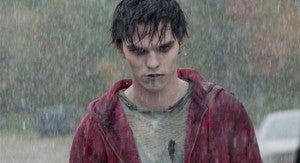 Last month, the first trailer for Warm Bodies was released. Now, the first four minutes of Warm Bodies has been posted online, which ties together several scenes from the trailer. Warm Bodies presents a different take on the whole idea of a zombie apocalypse, looking at it from the romantic comedy perspective

Here's the description for Warm Bodies: "A tormented zombie (Nicholas Hoult) experiences a profound transformation after entering into an unusual relationship with the daughter (Teresa Palmer) of a military leader charged with eradicating the walking dead. As the unlikely pair builds a tenuous bridge between the living and the dead, those on both sides of the battle begin to sense that nothing in their world will ever be the same again."