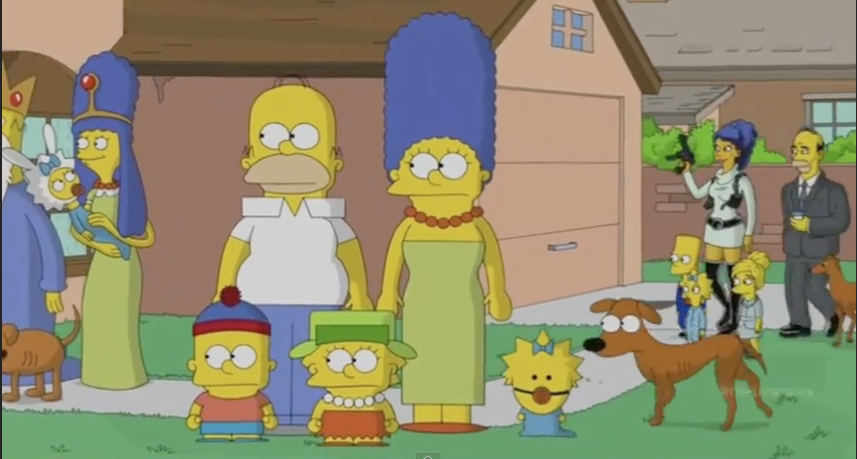 The Simpsons have breached the multiverse.

Several different versions of The Simpsons appeared on last night's Tree House of Horror XXV, as TV's most iconic family was recast through the lens of several other multimedia franchises.

The barrier-breaking ordeal began when the Simpsons encountered the spirits of their original incarnations from The Tracey Ullman Show in the late 1980s. After the modern-day Simpsons make peace with their vintage counterparts, Lisa recognizes that a door to countless other Simpsons incarnations is now open.

In a not-so-subtle bit of commentary, she asks: "If there can be two incarnations of The Simpsons, why couldn't some evil marketing entity produce millions of others?"

Lisa--and the world--got an answer when the following Simpsons variants appeared:

*Various Japanese anime (Homer as Roronoa Zoro / "Pirate Hunter Zoro" from One Piece, Marge as Rangiku Matsumoto from Bleach, Bart as Naruto, Maggie as Pikachu from Pokemon, Lisa as Mikasa from Attack on Titan, and possibly Santa's Little Helper as Shenron from Dragon Ball Z)

*The work of Sylvain Chomet (Triplets of Belleville)

*The Island of Dr. Hibbert from "Treehouse of Horror XIII"

Check out the full clip below:

What other Simpsons remixes should viewers have seen last night? Sound off in the comments.

She-Hulk: Every Easter Egg and Marvel Reference in Episode 1