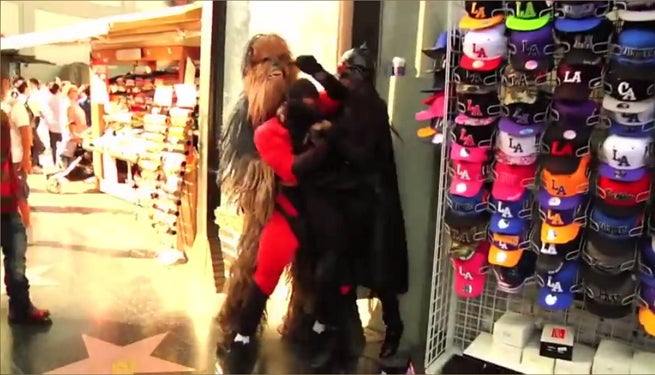 A scuffle broke out outside of the Chinese Theater on Hollywood Boulevard between several people dressed up as iconic characters. The scuffle arose between one person dressed as Mr. Incredible and another dressed as Batgirl (or Catwoman, or Catgirl, reports vary). The fight was broken up by people dressed as Chewbacca and Where’s Waldo, with the help of a man selling CDs, as another person dressed as Freddy Krueger looked on.

At one point, Mr. Incredible can be seen throwing the woman dressed as Batgirl to the ground.

Jimmy Kimmel took the opportunity to use the fight for a bit, recapping the events that transpired in the video footage and interviewing Chewbacca, Waldo, and the CD salesman.

A more serious report was filed by local news affiliate KTLA, though they did interview Chewbacca while he was still fully in character.

Showdowns like this isn’t the first time such violence has occurred between characters on Hollywood Boulevard. No arrests were made and police are reportedly offering a $100 reward for information about Mr. Incredible’s whereabouts.

When Chewbacca, Waldo, & Freddy Krueger Broke Up A Fight Between Mr. Incredible & Batgirl