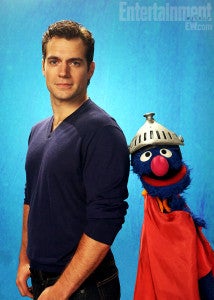 As part of his appearance on tomorrow's episode of Sesame Street, Man of Steel star Henry Cavill stopped by Super Grover's fortress of felty solitude for a photo opportunity with the Muppet. Entertainment Weekly scored the exclusive, and some details about the visit.

“Can I just say, you guys are incredible,” Cavill told the puppeteers at Sesame Workshop after his final take. “It’s really remarkable to watch you guys work. I have enormous respect for what you guys do.”

Cavill’s segment airs in the episode titled “Don’t Get Pushy” this Tuesday, Sept. 17 at 10 a.m. ET/PT on PBS. He's reportedly there to talk with Elmo about the meaning of "respect," and will share screen time with Elmo, the Three Little Pigs, and the Big Bad Wolf.