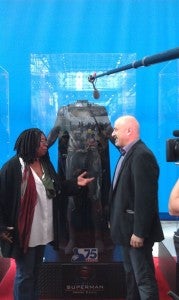 That was a bit anticlimactic. After DC Entertainment Co-Publisher Dan DiDio announced earlier this week via Facebook that he would be interviewed by Whoopi Goldberg on The View today, who would pitch him a story idea fore a DC comic book, the episode as it aired featured a quick montage of New York Comic Con images, followed by a conversation in which Goldberg pitched DiDio... ...well, something. It happened off-camera, so it's impossible to know just what she said. Whether that's because it will be an online exclusive for The View's website, whether there was no real pitch and they were just having fun or whether it's cut out because DC might actually use her idea is hard to know. Along with DiDio, she chatted with Marvel's Joe Quesada, filmmaker Kevin Smith, actor Zachary Levi (Chuck, Thor: The Dark World) and geek icons Seth Green and John Barrowman. None of these interviews ran in their entirety, and it's not clear whether she also had an idea to pitch Quesada. Thanks to the ever-lovin', eagle-eyed Ben Grimm for watching the episode for us!