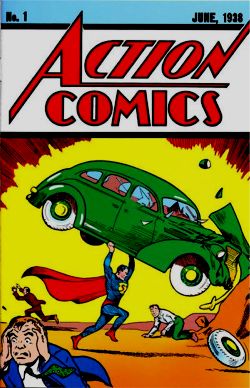 There have been several articles recently suggesting that new digital mediums for publishing comic books could mean the end of print comic books. A lot of these articles appear to be born out of DC Comics executive John Cunningham talking about how a small shift in readers to digital could throw off the economics of print comic books. While I agree that digital is an exciting new medium for comic books, I strongly disagree that digital comic books will mean the end for print comic books. While printers for the newspaper and magazine publishing industries should be sweating the rise of Kindle and other digital mediums, comic book printers have much less to fear. Here is why. People buy newspapers primarily to find out about the latest news. People buy magazines primarily to educate and entertain themselves. People buy comic books primarily to collect them as a hobby. Other than editions related to important historical events, the vast majority of old newspapers wind up in the trashcan. The same can be said for magazines, even though they might survive on the coffee table for a couple weeks longer. How many people throw away their comic books after reading them? How many people use their comic books as drink coasters? Odds are not very many, because almost everyone has read stories about how valuable old comic books are. While there are some people who do buy comic books solely for the entertainment value, there is a much bigger audience that looks at comic books as also being a collectible. The fallacy of thinking that digital comic books will kill print comic books is that it ignores the collectible value of comic books. There is no telling how many comic books sold today aren't even read but are immediately slid into protective sleeves with backing boards. People can't trade or wrap digital comic books in plastic. Comic books are much more akin to baseball cards or beanie babies as a medium than they are to newspapers or magazines. People like to hold them, save them, trade them, and dream about one day retiring off the money they made selling an old copy of Darkhawk #32. Even though I don't believe digital comic books will ever kill print comic books, I do think digital comic books will change the medium in a very important and a very good way. Right now, a handful of publishers control the entire comic book industry, and the only large one that had an open submissions policy just closed it. The harsh reality is that due to the economics of the comic book industry publishers are very reluctant to take a chance on new, unproven talent. Most of the new talent that publishers take chances on are really people who have had proven success in other mediums. To break into comic books as a complete unknown is a huge challenge. Digital comic books will change this. Sure, the majority of the best-selling digital comic books will still be put out by the larger publishers who own the household name superheroes, but digital comic books will give a shot to people who likely had no shot of getting Marvel Comics or DC Comics to even seriously look at their work. The cost of publishing a comic book will drop to the time required to write and draw it. No longer will a comic book need to be able to sell tens of thousands of copies to justify the printing cost. With the barrier to entry effectively eliminated, more new talent than ever before will have a shot at the comic book medium. Sometime in the next year or two, there will be individuals that put out an independent digital comic book that becomes a huge hit. These individuals will make a ton of money selling their comic book on iTunes, and they might even land a multi-million dollar movie deal. Their success will attract huge news attention, which will lead to thousands of more digital comic books. If some comic book readers do shift their buying habits from print to digital, it will be more than offset by the younger readers who discover the medium of comic books for the first time through digital. When was the last time that you saw a kid in a comic book store, most of the buyers at conventions and stores are people in their twenties, thirties, and forties. The older readers aren't going to give up their print comic books that they've collected for years, but new younger readers just might discover comic books through their iPod. Some of these new younger readers will become collectors who will want to have print copies of their comic books as well. The digital medium will not only not kill print comic books, it could very well help to drive print comic books to new heights.