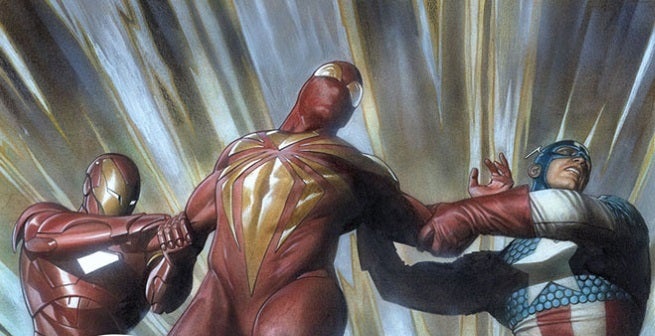 The idea is that Marvel would introduce Spider-Man in Captain America: Civil War, presumably as a hero greatly affected by the government’s new superhuman laws. Spider-Man’s secret identity was revealed during the original Civil War comic book series, and Peter Parker was used as a way of exemplifying the dangers posed to any hero who shared his secret identity. So sure, there’s definitely a place for Peter Parker in the Civil War story.

But does Marvel really need Spider-Man for Civil War? I don’t think so.

Spider-Man was an integral part of the Civil War comic book series for two reasons. The first was because he is the highest profile character at Marvel Comics with a secret identity and a supporting cast of loved ones who aren’t part of the superhuman community – Aunt May and Mary Jane Watson – to protect. While Captain America and Iron Man were the ones waging the war, Captain America’s identity was already on file with S.H.I.E.L.D. and the government. As for Iron Man, his identity was secret at that point (though he quickly divulged it, for obvious reasons), but Tony’s never really been a family man, so the risk was primarily to himself.

No, Peter Parker definitely had the most to lose by revealing his secret identity, something that Marvel drove home when an assassin went looking for Peter and shot Aunt May instead. But this entire story thread is unnecessary for the film adaptation, because secret identities don’t mean the same thing in the Marvel Cinematic Universe as they do in the Marvel Comics Universe. In fact, the concept barely exists. Superheroes in the Marvel Cinematic Universe aren’t masked gods or street level vigilantes, they’re celebrities who live in a tower with their name emblazoned at the top for all to see. You don’t need to go looking for the Avengers, they’re sitting in plain sight.

Those involved with the film have already said that they’ll be altering the story of Civil War to make it less about superhero secret identities, so why shoehorn Spider-Man into it? On top of that, if a report from last week is to be believed, Marvel wants to reboot the Spider-Man film franchise to focus on a teen hero trying to balance his superhero life with his mundane responsibilities. That’ll be hard to do if they expose him as Peter Parker during his first day in the universe.

The second role that Spider-Man played in Civil War was to represent the shifting moral ground between Iron Man and Captain America. Spider-Man had become an Avenger not long before the events of Civil War, and revealed his identity to certain of his team-mates. He and Tony Stark quickly became close over their shared love of science, and Tony took Peter under his wing. So when the events of Civil War kicked off, Tony had Peter’s complete trust and agreed to go through with unmasking himself. It was a show of faith. Once Tony used his Thor clone in battle, and the clone killed Black Goliath, that faith in Iron Man was shattered, and Spider-Man jumped to Cap’s side.

Without Spider-Man’s stature in the Marvel Universe, and the pre-existing relationship with Tony Stark, these actions would be colored entirely differently. Instead of adult Spider-Man choosing, of his own accord, to back Tony’s play, the film version would seem like Tony Stark was manipulating some poor kid in a costume. And Spider-Man’s change of heart midway through the war wouldn’t have nearly as much meaning without him being established as the heart of the Marvel Universe.

In the end, Spider-Man’s presence in the narrative of Captain America: Civil War may actually cause more problems than it would solve. Sure, you can just throw him in there for a cameo, but that’s hardly necessary. And if you need a street level hero to take it on the chin to demonstrate the dangers of the Superhuman Registration Act, there are plenty of other options for Marvel to choose from, and one of them is making his Netflix debut in May (hint: it’s Daredevil).

Civil War in the Marvel Cinematic Universe is going to be different than it was in the comics. That’s okay, but the changes made will be more than enough to compensate for Spider-Man’s absence. He was never really a plot driver in the original story anyway, just a victim of the war, and there will surely be more of those to go around.