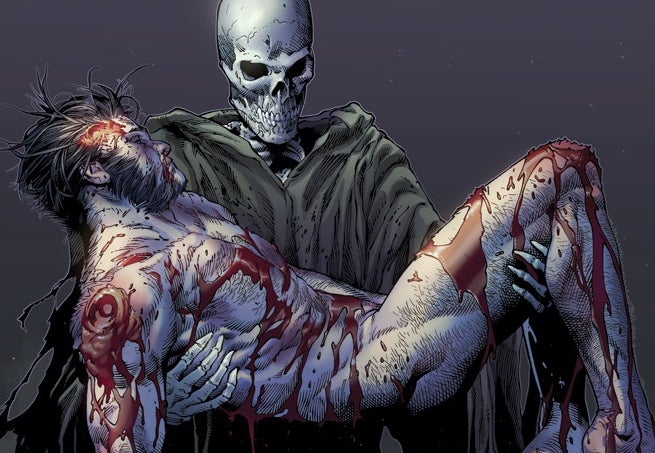 Warning: If you have not read "The Death of Wolverine #4" yet, do not read this article.

The Wolverine is dead, and he's never coming back.

No, for real. The Death of Wolverine #4, out this week, put the final coda on Logan. And Like editor Mike Marts suggested in past interviews, Marvel sealed an airtight lid on Wolverine's fate.

This is no metaphor. Wolverine's death came via an adamantium bath, which when cooled, formed into the indestructible alloy. As Wolverine brought the killing blow to the creator of the Weapon X program, the adamantium sealed into a permanent cocoon.

When you sit down and really consider it, this fate doesn't come with much of a backdoor. Once solidified, we all know that adamantium is unbreakable and impenetrable. The only thing that could breach it, The Muramasa blade, is out of the picture. Wolverine broke the mystical sword into several pieces and buried them in secret locations—information that now joins Logan in the grave.

But, even if someone could even crack open the adamantium encasing Wolverine, the man inside would just be a corpse. Death-by-adamantium does quite a number on the mortal body, and as we've known for months now, Wolverine is only a mortal. At the very least, he died by asphyxiation. The sentient virus from the microverse that countered Wolverine's healing factor is still coursing through his lifeless body. And there's no cure for it. It even stumped Reed Richards, Marvel's brightest mind, as he struggled to find a treatment in Death of Wolverine #1.

This is comics, however, so there's no argument against the fact that Marvel could conjure a solution multiple solutions in an instant. But it would feel beyond contrived. The publisher dug deep to find the most-fail proof deathtrap available for James Howlett. Imagine how much deeper they would have to dig to yank him out of it? Not only would it be a disservice to the readers who invested in Wolverine's death march, but it would also come as a slap in the face to the character. He had finally made peace with his mortality. By striking every classic "Wolverine" moment off his bucket list—like fighting Sabretooth, donning the Patch persona one last time, and ending the Weapon X program that made him The Wolverine in the first place—he didn't have much left to do but peacefully pass.

In the end, fate even granted the Wolverine his final wish. As he drew his final breathe, he watched the sun peacefully set. His arc came to a close, and it would be nothing short of a gimmick to reopen it.

I now open myself to your evisceration in the comments section. It's probably what Wolverine would have wanted.