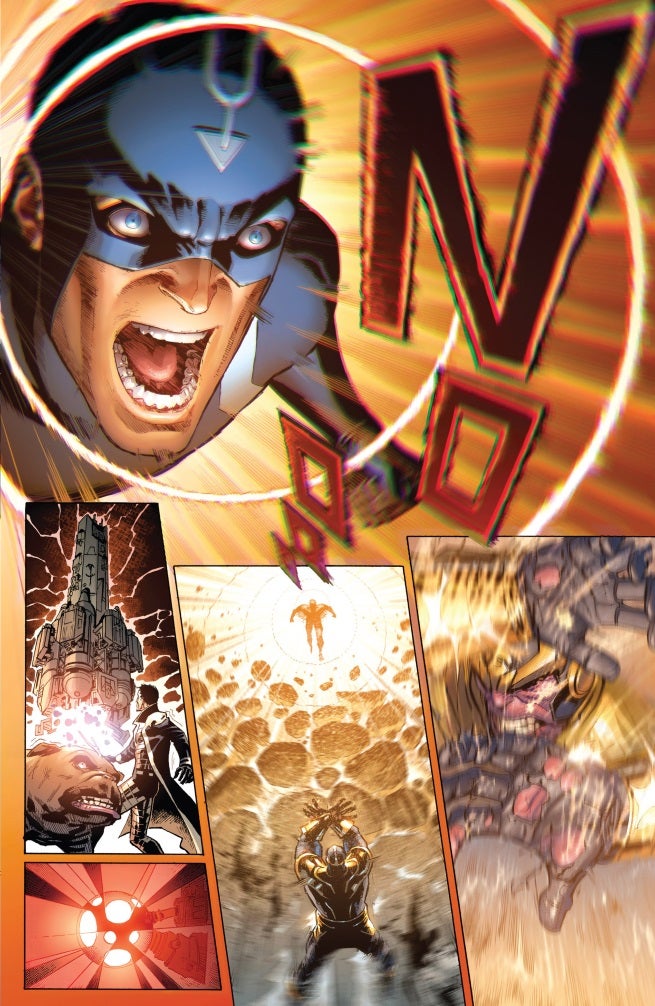 Next weeks' winter finale of Agents of S.H.I.E.L.D. promises big changes for the characters, but could it be setting the Marvel Cinematic Universe on the path to even bigger changes?

The episode title itself, “What They Become,” hints that a transformation will occur, but the synopsis brings it a step father, saying “Coulson and Whitehall's forces meet in an explosive confrontation that dramatically alters everyone's fates. Meanwhile, Skye discovers shocking secrets about her past.”

Working under the assumption that the lost city that both Coulson and Whitehall are searching for is indeed Attilan, one assumes “What They Become” is Inhuman. This is a huge concept to be introducing into the Marvel Cinematic Universe, and some are concerned that Agents of S.H.I.E.L.D. won’t be able to do Attilan, in all its Inhuman glory, justice. But perhaps Coulson and Whitehall find Attilan, sans the glory.

From a practical standpoint, yes, if you’re going to present Attilan with the same kind of movie grade grandeur as Asgard was presented in Thor, then you probably need a movie budget to do it. Not to mention that one of the consistent criticism of Agents of S.H.I.E.L.D. has been its overreliance on the same bland sets week after week, which doesn’t help instill confidence in the show’s vision for Attilan.

There’s also the fact that we have no really casting information on the Inhuman royal family, and that the Inhumans film doesn’t hit until 2018. To introduce Attilan ahead of all of this seems odd.

So maybe when Coulson and Whitehall get to Attilan, it’s not the glorious secret city we expect it to be. Perhaps it’s empty and inactive, save for the temple that the Doctor mentioned. Perhaps that temple houses the key to Inhumanity, the Terrigen Mist. It’s possible that Skye, and maybe Coulson and Raina, will come into contact with this substance, unlocking their Inhuman potential, and accounting for the big change hinted at in the synopsis.

So then how do we get from there to the Inhumans movie in 2018? Well, now that the Terrigen Mists are in play, there are several interested parties who may want to learn to weaponize it. This may lead to the creation of a device from the comics, called the Terrigen Bomb. The Terrigen Bomb was used as a last defense against Thanos in the Marvel Comics event Infinity, and released Terrigen Mist into the world at large. This led to the transformation of many previously normal humans into superpowered Inhumans.

So here’s the theory: tonight, we visit abandoned Attilan. Skye comes into contact with the Terrigen Mist, and possibly Raina as well (I’m going to guess that the show keeps Coulson normal, or that he has a violent reaction to the mists, because “normal guy” is part of what makes Coulson an interesting character in the context of the MCU). After learning of the Mist’s potential, Hydra and/or S.H.I.E.L.D. and/or the U.S. government begins studying it and learning to weapoinize it. At the same time, certain other persons come into contact with the mist and become the characters we know as the Inuman Royal Family (Black Bolt, Medusa, Karnak, etc.). This would likely be in relation to the ongoing study of the Mist, but may also occur somehow else.

During the events of Avengers: Infinity War Part I, things look grim for Earth. Thanos and his minions are bearing down on the planet, and in a last ditch effort someone – possiblly Black Bolt, as in the comics – unleashes the Terrigen Bomb, transforming many others, including Carol Danvers, into Inhuman superheroes. It is only then that the royal family reclaims Attilan, leading into the events of the Inhumans movie.

There’s a lot of guesswork involved with this theory, I admit. Some will interpret the “explosive” part of the synopsis as hinting at the Terrigen Bomb going off in tonight’s episode, and some theorize that the yellow cloud seen in the Avengers: Age of Ultron trailer is actually the result of the Terrigen Bomb, which would then give the Scarlet Witch and Quicksilver their powers. But, somehow, the timeline presented with this thinking doesn’t line up for me. With all of this Terrigen activity happening, where is the Royal Family? And didn’t we see the Scarlet Witch and Quicksilver already displaying their powers at the end of Captain America: The Winter Soldier? Unless that scene, or certain scenes from Avengers: Age of Ultron, are chronologically displaced, it seems like something doesn’t add up.

We don’t have much longer to speculate, at least not as pertains to the fate of Skye, Coulson and Raina. The Agents of S.H.I.E.L.D. winter finale, “What They Become,” airs December 9 at 9 p.m. ET on ABC.

Will The Agents Of S.H.I.E.L.D. Midseason Finale Put The MCU On The Path To A Terrigen Bomb?