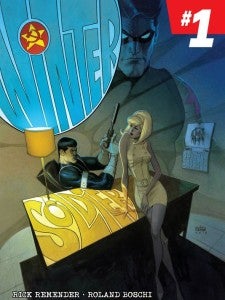 A new miniseries starring Bucky Barnes, the Winter Soldier, will launch in 2014 from Marvel Comics, timed to coincide with the April release of Captain America: The Winter Soldier to theaters.

Titled Winter Soldier: The Bitter March sets up future events that will "shatter" the world of Steve Rogers in the pages of Captain America next year, Remender told USA Today. "At the same time, it is a love letter to (early-period) 007 and Jim Steranko S.H.I.E.L.D. comics."

In the story, a pair of Nazi scientists discover a formula that could win the Cold War for the Russians in 1966--and it's down to The Winter Soldier facing off against S.H.I.E.L.D. to see into whose hands it will eventually fall.

"He was a tool who had very little control of his own mind, but I will be exploring how Bucky Barnes is underneath all of it still," Remender says. "Even back then, there was a piece of him trying to stand back up."