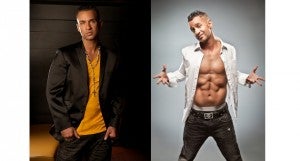 In 2000, when Wizard's then-CEO Gareb Shamus decided to make his first foray into comics publishing, he brought in Mark Waid, Jimmy Palmiotti, Amanda Conner and Garth Ennis, among others, to help with the launch of Black Bull Comics. Well, they're all pretty busy these days. So where did Wizard World turn this time around? The Jersey Shore, where else? According to a press release made available earlier today, Wizard World--formerly the publishers of Wizard magazine and currently the company behind the Wizard World Conventions--has hired the Jersey Shore's Mike "The Situation" Sorrentino to work on a new superhero comic book for them. And yes, as these things tend to be, the superhero is based on Sorrentino. As quoted at The Beat, the release says,

"Wizard World Inc. (WIZD.PK) announces Mike 'The Situation' Sorrentino along with the Sorrentino family have signed a publishing, development, and appearance deal with Wizard World to create and publish a comic book hero based on Mike 'The Situation' Sorrentino and his family. The agreement will team Mike Sorrentino, along with his brothers Marc and Frank, sister Melissa, and mother Linda, with Wizard World, the largest Comic Con Tour in North America, spanning a dozen cities and reaching millions of fans every year through its events, social media, digital and PR outreach."

It sounds essentially like a superhero reality show, where a reality star whose series has fallen on hard times can fall back on his fantasy life to create comics entertainment whether or not The Jersey Shore continues. The show typically revolves around its stars' drinking and carousing, but in the past few months, Sorrentino has been in and out of rehab and one of his co-stars is pregnant, throwing a new season (or at least one without major formula changes for the popular show) into question. "Wizard World is excited to partner with one of pop culture's greatest stars. Mike 'The Situation' and his family will broaden our relationships with celebrities to new areas that leverage our access to the media, the fans, and especially our ability to bring comic book characters to life," said John Macaluso, CEO, Wizard World. Thanks to former Wizard Managing Editor Mike Cotton of Champion! Magazine for calling attention to The Beat's coverage.