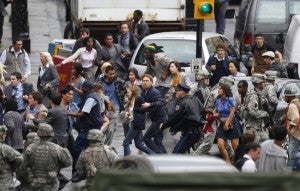 Damon Lindelof may have recently signed a TV deal and seem to be moving away from feature films following the release today of Prometheus and the upcoming Star Trek 2, but the writer/producer just keeps getting pulled back in. The Hollywood Reporter said today that the Lost alum will take a pass at the World War Z script before the film goes back for reshoots in the fall, focusing mostly on the movie's third act.

The film, an adaptation of Max Brooks' 2006 novel by the same name, stars Brad Pitt and has had a long, troubled history. Rumors originally had it going to a pay cable home like HBO or Showtime as a miniseries, but when Pitt became involved a feature film was essentially inevitable. Since the book didn't really fit the format of a feature, there have been doubts from the word go as to how exactly it would work and troubles on the set, along with a slew of missed deadlines, have contributed to a media narrative that the production is in trouble.

Quantum of Solace director Marc Forster is attached to the film, which reinvents Brooks' fictional oral history as a more action-driven story more suited both to the feature film format and Pitt's skillset.

The movie reportedly finished shooting last year but has been delayed and last week it was announced that it would go back for substantial reshoots. It's not the first major release to get that treatment recently; G.I. Joe: Retaliation pulled out of its June release date just five weeks before it was slated to hit theaters, reportedly to add 3D and work out some kinks with the story.

World War Z To Get a Rewrite From Damon Lindelof