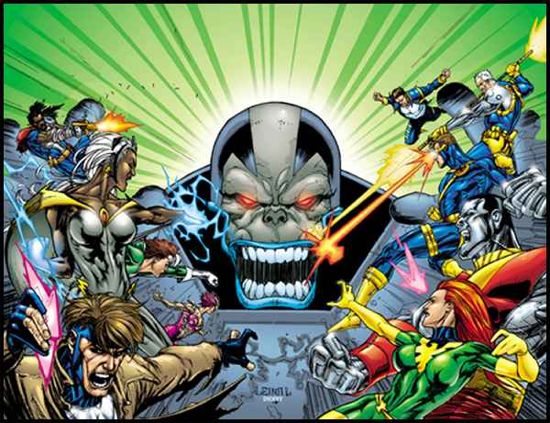 It's been over a week now since Bryan Singer announced that X-Men: Apocalypse was coming in 2016, and the conversation around the film has already started to die down.

It's understandable: all we know so far is a title, and there's already another X-Men movie between here and there anyway (2014's Days of Future Past). There's also the fact that in the time since Singer's announcement, Sony dropped the bombshell that they're expanding the Spider-Man universe out to a minimum of six films, including two that won't star Spider-Man as the primary protagonist.

Anyway, the X-Men's new film announcement is a pretty interesting one; in the wake of X-Men: First Class, X-Men: Days of Future Past, Captain America: The Winter Soldier, Avengers: Age of Ultron and even, to an extent, The Dark Knight Rises--all films based entirely or in part on specific comic book stories rather than the general "based on characters appearing in..." kind of films we've seen in the past--the fairly generic "Apocalypse" makes one wonder whether it's going to be based on a certain story or just a story that uses Apocalypse as the villain.

In the case of the former, though, we (and other sites, too, certainly) have been wondering which stories we might pick from if it were us trying to make a movie where Apocalypse was the bad guy. Here's what we came up with... 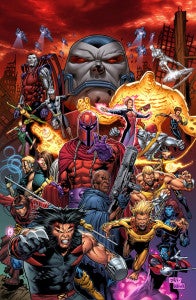 This is the obvious answer, right? I mean, pretty much everybody assumed it was the story. It's not only his best-known story by a long shot, but it would also make sense that you can't tell everyone it's "Age of Apocalypse" without spoiling the time-traveling end of Days of Future Past.

Of course, even if it is Age of Apocalypse, there's no guarantee they'll call it that, given that it will be coming out something like nine months after another little superhero movie called Avengers: Age of Ultron.

I've actually been thinking about that a lot. I feel like it can go one of two ways: Either Days of Future Past leads into Age of Apocalypse, because they totally break the timeline while trying to fix it, or they can't do Age of Apocalypse because two time travel/alternate reality stories in a row will alienate casual viewers if they aren't connected.

That said, if they could make it work, it would be a perfect opportunity to do something incredibly different from all previous X-Men movies, and set the stage to really break ties with the very first movies they haven't been able to shake--and will fully revive with 2014's X-Men: Days of Future Past.

And, you know--who better than Bryan Singer to redefine the next generation of X-Men movies and break ties with the universe he originated?

The original five X-Men faced off against Apocalypse in the early days of X-Factor, constituting the powerful mutant's first appearance. Legend has it he was slotted in at the last minute, a new and exciting creation replacing an existing character who would have been used as the puppet master pulling the strings behind a story arc, after the story's writer was replaced by Louise Simonson, whose husband Walter drew that first image of the character and won the editors over.

Ultimately he was the principal antagonist of the series--a role he would later play in big chunks of X-Force, a book that's now being adapted for film (more on that later).

During the "Fall of the Mutants" storyline, El Sabah Nur enlisted Angel, one of the original X-Men, as one of his Four Horsemen, Archangel, a character who would look pretty good onscreen if I do say so. Unfortunately, that act of cruelty won't carry quite the same emotional punch if done in a movie, since Angel in the films is not a character who's been built up enough for us to care about him. 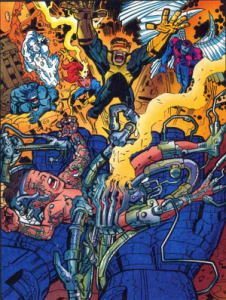 Sins of the Future

More time-travel, which carries with it some of the same complications as Age of Apocalypse. Still, it could set up the planned X-Force movie nicely by establishing who Cable is and why he's key to the future of mutantkind. Why? Well, here's the basic kernel of what made Sins of the Future a key Apocalypse story:

"Apocalypse learns of Sinister's intention to create an adversary powerful enough to destroy him: Nathan Christopher Charles Summers, the son of Scott Summers and Madelyne Pryor. Apocalypse, viewing him as a threat and realizing that Nathan's energy is the very energy that awoke him all those months earlier,[28] sends his newly formed group, the Riders of the Storm, to abduct the Summers child. Apocalypse at this time had conquered the city of Attilan, home of the Inhumans, and enslaved part of its population. X-Factor, alongside the Inhuman Royal Family, attacks Apocalypse's lunar stronghold. Although Apocalypse is severely defeated, the young Nathan is infected with a techno-organic virus, and is sent to the future with a woman named Askani to be cured."

Of course, Nathan becomes Cable and ultimately his destiny is that he'll be in conflict with Apocalypse for most of his life--and lead X-Force when he returns from the future.

Obviously Fox doesn't have the rights to the Inhumans--but that's an easy part to change. 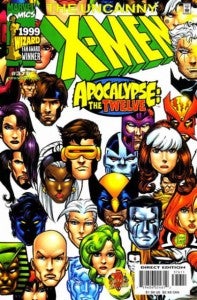 Here's how it's explained on Wikipedia (it would need to be dumbed down a bit; I'm pasting theirs because I can't even remember all of the story's moving parts):

Supposedly lost diaries of the mutant seer Destiny surfaced, telling of twelve beings that could defeat Apocalypse once and for all.Various mutants, all listed in the prophecy, are abducted by Apocalypse's Horsemen including a faction of the Skrulls. The Twelve legend was in fact a ruse, orchestrated by Apocalypse himself; once the Twelve are assembled, Apocalypse intended to use them to transform himself into a godlike entity beyond the Celestials.It is revealed at the end of this story arc, that Apocalypse's physical form has been burned out due to the vast amount of energies he has under his control, forcing him to wear a bio-armor (like his future counterpart), and now plans to use Nate Grey as a host body for him to move his energy and consciousness into. The X-Men confront Apocalypse as he is close to merging with Nate, but are unable to stop him. Cyclops pushes Nate Grey out of the way, merging with Apocalypse instead.While the merge is successful, Apocalypse's aim for unlimited power is not, and he attempts to complete the transformation by warping reality into various scenarios (see Ages of Apocalypse). Apocalypse hoped to lull the Twelve into empowering him with their energy, but eventually, the mutants realize their true predicament and Apocalypse teleports away.

An amnesiac and powerless Cyclops regains control of the merged form, but Apocalypse begins to re-emerge. Jean and Cable are alerted to his location in Egypt, where Jean in the end manages to free Cyclops by telepathically tearing out Apocalypse's essence from her husband's body, rendering Apocalypse in an incorporeal astral form, which Cable apparently destroys using his Psimitar.

Is this kind of a cheat? Yes.

Is it our bet for what will likely happen? Also, yes.

Consider this: Bryan Singer never directly adapted particular comics stories in X-Men or X2: X-Men United. He came on board X-Men: Days of Future Past after that decision had been made and announced and presumably after the script was well underway. I think he wants the flexibility to use a villain as powerful, interesting and versatile as Apocalypse with as much creativity as he can muster.

X-Men: Apocalypse - What Will It Be About?