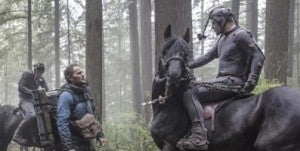 20th Century Fox started its panel in Hall H earlier today by giving everyone in the room a pair of 3D glasses, with no explanation what movie they were for. They say they're the first panel to do 3D, and they're also the first panel to use Crowdzilla to film the whole room so that those attending can go in and tag themselves to show they were present.

Dawn of the Planet of the Apes kicked off the event, with Jason Clarke, Keri Russell and Andy Serkis joined onstage by director Matt Reeves.

Reeves discusses getting close with the ape in the previous movie and that he wanted to make a Caesar (the ape)-centric film that introduced the Planet of the Apes.

"We want to make you all apes," is the money quote, saying that Serkis was key to letting audiences connect emotionally with the characters.

Serkis takes over and echoes a lot of that--the apes are going to get a lot of development and be major players. A lot of the movie, it seems, will actually focus on the interplay between different factions of the apes.

Russell said that she joined the film on account of Reeves. "I tell you, it’s extraordinary to watch every single day. In the end, we all just want to find out inner ape," she told the audience--she's really glad they hired parkour artists and Cirque du Soleil performers to help with the motion capture.

After a short and action-packed clip for APES, James Mangold comes on stage to talk The Wolverine. 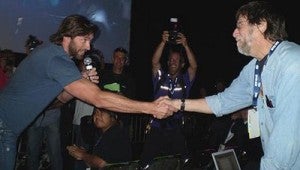 "This is a tough-guy film," he says, even though fans already probably have their expectations pretty well set for the film. He promises that the movie will deal with Wolverine's rage--of the berserker variety, we'd guess.

After being compared to Clint Eastwood's The Man With No Name and Sean Connery's James Bond, Jackman joins Mangold on stage.

He says that after all this time as Wolverine, he wanted to do something fresh and different and really for the fans, and that adapting the Miller/Claremont material gives him the chance to really bear down on the character. He read that story more than ten years ago and has wanted to do it ever since.

Wolverine's immortality/invulnerability is key to his bad-assness, but it doesn't stop those around him from being hurt and in turn affecting him emotionally. Jean Grey is a key example, as we've seen in trailers.

"Sometimes I felt like we were making a Fellini film," Mangold says. "With hardcore action."

Jackman has played Wolverine more times and probably over a longer duration than any other actor playing any other superhero. It's a career-defining role, and Jackman wants to acknowledge that by thanking Len Wein, co-creator of the character, for his work. He pulls Wein out of the crowd for a handshake.

Before he goes, Jackman pulls Bryan Singer up on stage with him, too. The pair introduce X-Men: Days of Future Past together, and reveal that even though it's not quite done filming yet, they've got a piece of 3D footage they want to show the audience. You can read all about the clip here.

After that, a huge number of Days of Future Past cast members arrive on stage.

"This is Nerd-vana--to have Star Trek and Middle Earth in Hall H," says the moderator.

"It's so good to be back in California now that you've gotten rid of Prop 8," McKellen says. "I'm always looking for a new husband. Nice to meet you, Michael [Fassbender]."

"Doesn't Storm ever get any love?" Berry asks--but there's no response when the audience suggests Black Panther.

The fan Q&A session, perhaps inspired by this week's X-Force news, is all about who might end up in future movies. Will we see Deadpool? Will Rogue and Gambit ever end up together? The panelists basically just keep saying that anything is possible.

"Quicksilver was always a part of our story," Singer tells someone who asks about the character's inclusion. "I can't speak to The Avengers."

The actor who plays the character pipes up that "he's very fast." Fassbender adds that Quicksilver has great genes.

Jackman is asked about singing in a movie, and when he says that nobody wants to see that, the crowd cheers him on. Eventually he sings a short, jokey, Wolverine-themed song and everyone goes nuts.

Jackman also claims that with all the Wolverine cosplayers in town, he's been walking around in costume and not being recognized in San Diego.

Jackman says that if he couldn't play Wolverine, he'd liked to have played Deadpool, and the audience cheers wildly.

They replay the earlier footage after a standing ovation for the cast.

X-Men: Days of Future Past Dominates Fox Panel With Apes and Wolverine