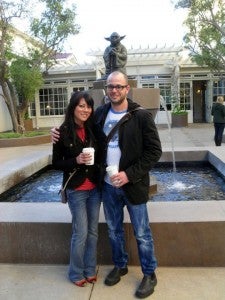 Lost co-creator Damon Lindelof, currently working on the film 1952 with Brad Bird and dodging Star Wars Episode VII rumors, spoke with Collider about the success of The Walking Dead in a new article that went live today. Lindelof is, apparently, a bit fan. Having been a fan of the comics, he loves all the ways that the show is different (notably Merle and Daryl Dixon and says that he feels like the show "can kind of do no wrong." Read the excerpt below:

Collider: I think season three of The Walking Dead has been incredible. What's your take on it so far? Lindelof: I'm a massive fan of the comic book and have been since the very beginning, and [comic creator Robert] Kirkman and I actually found each other and befriended each other in a pre-Twitter era just because I let everybody know who was listening how much I loved his stuff. So then when it got made into a TV show and I started watching it—it's almost impossible to separate the two ideas, there is just only The Walking Dead. I know a lot of people say, "Well there's the comic book and there's the TV show," but my feeling of fondness for it is really that show can kind of do no wrong. That being said, it's been doing a tremendous amount of things very, very right, and I think that what's exciting about it is that it can aberate from the comic book in really exciting ways, like Merle and Daryl, for example, who aren't in the comic book become wild cards in that universe because they never existed in it before. So I do feel like anything can happen on that show and it's tremendously exciting, but not at the cost of the big thematic leap. What's interesting about that show is, you feel like the zombie thing has just been done to death; it's just a dead trope, no pun intended, like there's nothing new to say about zombies. But I think that that idea of—"The Walking Dead" is not the title for the zombies, it's the title for the survivors, and the show plays in this ambiguous moral space of at what point are you no longer a human anymore? What behaviors will you engage in that are essentially sacrificing your own inherent morality or ethical sense of being? And wrapping that all up in some sort of very satisfying package where also zombie arms are getting torn off and heads are rolling and all those other things are happening, I think it's an enormously tall order. A lot of the time as a geek, I will experience this thing where I was into something that was niche-y and cool, and then if it becomes successful in the mainstream, I feel bitterness towards the people who are now accepting it because they're Johnny Comes Lately. It's like the Seattle thing where it's like, "I've seen Nirvana play for four years in small clubs and now you think 'Smells Like Teen Spirit' is their first song? Go f--- yourself!" That's the way that you'll feel when you first hear about Scott Pilgrim getting made or something like that, and then you go "Oh but it's Edgar [Wright], so it's gonna be okay." And then you sort of switch over to "I want this small little niche thing to reach widespread success," the fact that there's 10 million+ watching The Walking Dead every week and it's a genre show that even on a network would be Top 10, or number one demo status, that's amazing. That's something that even Lost was never really able to accomplish in its heyday of being overtly genre and nobody cared, in fact the more genre Lost became, the more it tended to alienate a certain subset of viewers, but people accept the crazy zombie show at face value. In fact it's picking up viewers, and that's because the show's so damn good. The [ex-showrunner Frank] Darabont and the current showrunner Glen Mazzara and all that aside, I really feel like Kirkman doesn't get his due in terms of creating that world and populating it with really fascinating characters and interesting, original ideas that feel like they're familiar enough if you're a fan of the post-apocalyptic zombie genre, but you do feel like you're seeing it in a way that you've never seen it before. The ratings are stunning. Have you heard anything from studios or creative people in terms of maybe certain networks are loosening up to ideas that were maybe too radical before? Lindelof: I definitely think anytime a genre show is successful, it opens the door to genre. That's the nature of the beast, it happened with X-Files, it happened with us, it happened with Heroes, and now it's happening with The Walking Dead, and that's always exciting if you're a fan of genre storytelling. But at the end of the day, nobody knows what the hell anybody wants to watch or they would only create hit shows and there would be no sh---y shows. I don't know what the history of The Walking Dead is, but if it's anything like the history of Mad Men or the history of Breaking Bad, several other places passed on it before AMC said, "Okay let's get me some zombie." Because the idea of like in a repressed economy, in a time of recession, who wants to see that? Who wants to see the dirty, gross people straggling through a post-apocalyptic United States that's overrun by zombies. And the answer turned out to be everybody. Everybody wants to see that.