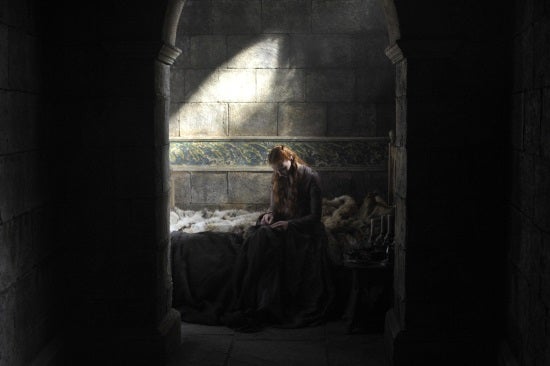 Since the beginning of Game of Thrones, Sansa Stark has been stuck in a passive role, often a victim. She was Joffrey's plaything, then forced to marry Tyrion Lannister, and then a pawn in Joffrey's assassination before being "rescued" from King's Landing by Petyr Baelish. In last night's episode, "The Mountain and the Viper," Sansa finally got to show some agency and that she's been learning a lot from watching how the game is played in King's Landing, especially as taught by Littlefinger. In the newest "Inside the Episode" featurette from HBO, showrunners D.B Weiss and David Benioff discuss how far Sansa has come. "[Littlefinger's] been teaching Sansa lessons for a long time now," says Weiss. "He's been making grand statements to her about the nature of the world. I don't think it's ever occurred to him that she might be learning these lessons, taking these lessons on board…in this episode, she puts all those things together to show that she is, indeed, not 'a silly little girl who never learns," but she is a very smart girl who has a learned a great deal from her teacher." In a separate video interview, A Song of Ice and Fire creator George R.R. Martin also talks about Sansa's increased ability to play an active role in her own story. "She is beginning to at least try to understand how she can play the Game of Thrones and be, not a piece, but a player with her own goals and moving other pieces around," says Martin. Weiss and Benioff also go on to discuss the Bastard of Bolton being lifted up by his father, the conversation between Jaime and Tyrion Lannister just before Tyrion's trial, and, of course, the fight between Gregor Clegane and Oberyn Martell. Game of Thrones airs Sundays at 9 PM ET on HBO.