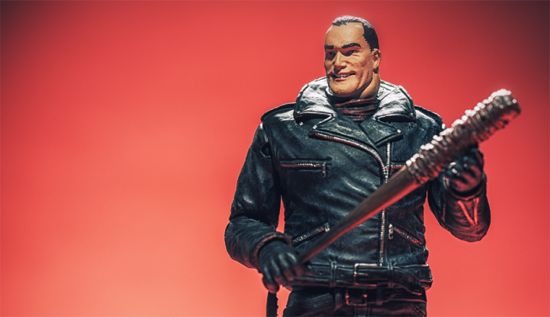 While Walking Dead TV viewers are just now recovering from the evil that was The Governor, it appears that another bad guy from the Walking Dead comics will eventually be heading to the TV screen. In the comic books, Negan might be the only person more reviled than The Governor. Negan leads a group called the Saviors, and he is famous for carrying around a baseball bat wrapped in barbed wire that he calls Lucille. Negan also brutally killed a beloved character in the series, which is why fans might hate him more than The Governor. When Entertainment Weekly asked Walking Dead creator Robert Kirkman if Negan would be making his way onto the TV series, Kirkman gave a pretty definitive answer. Kirkman said, "The plan is that we will see him eventually." However, fans shouldn't hold their breath on seeing Negan during Season 4, as Kirkman doesn't want to introduce the character to soon after The Governor storyline. Kirkman explained, "Well, there was a lot of breathing room in the comics between them. Whether or not we have the same amount of breathing room, or if we do cut that down a little bit and bring him into the show a little early remains to be seen. But I definitely do think there needs to be some kind of space from a Governor into a Negan. You have to have something of a break in there. So I wouldn't expect him to be showing up — definitely not in season 4. I don't know. I wouldn't expect it too soon. But we are all very excited about the prospect of bringing that guy into the show." McFarlane Toys recently released an action figure of Negan, which is pictured above. The Walking Dead Mid-Season Premiere will air on Sunday, February 9, 2014 at 9 PM ET on AMC.

Negan Will Eventually Be Part Of The Walking Dead TV Series