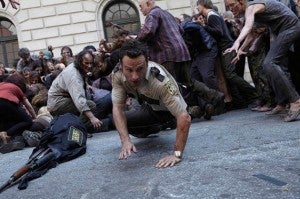 In his weekly spoiler column at TV Line, Michael Ausiello told fans that another series regular will die in the upcoming third season of AMC's The Walking Dead...and based on the way he describes it, it's not the one comic book fans are thinking of. "I can confirm that a series regular will become zombie kibble during Season 3," wrote Ausiello, "but whether that death takes place in the first half or second half I can't say." The "zombie kibble" line might not mean anything, but it seems to imply that the character in question will die at the hands of the walkers, which doesn't fit the profile of the character so widely believed to die soon that even the actor playing that character has expressed a hope for it to happen. (Spoilers, obviously.) One has to wonder if this ties into the fatality teased in the season premiere. Show producers have suggested that someone (they certainly never said a series regular) may not make it out of the debut episode this year. One the other hand, hardly an episode passes of the series where someone doesn't die, so that might not mean much.

The Walking Dead: A Series Regular Will Die (Not the One You Think)