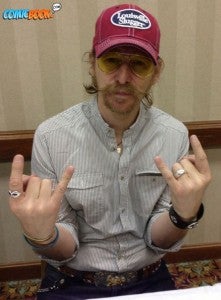 While no one is supposedly safe from being killed off on The Walking Dead, past cast members sometimes do return in flashbacks or hallucinations. At Fandomfest in Louisville, Kentucky, Comicbook.com caught up with Lew Temple, who played Axel on The Walking Dead. Axel was surprisingly and suddenly killed off during Season 3 of The Walking Dead. What made Axel's death especially shocking is that Walking Dead creator Robert Kirkman has called Axel one of his favorite characters. When we told Lew Temple about Kirkman's fondness for Axel, Lew Temple said, "Right on, thank you Robert, he was one of my favorite characters as well. I think all the characters are great, because they come off the page. I think it's really interesting to see them come out of two-dimensional into three-dimensional development if you will. But I adore Axel. I felt really proud with what we did with him, and there was more to do for Axel and with Axel. As me, Lew Temple, I'm going to hopefully go on and continue to work, but Axel is all done. I was disappointed to have him fall by the wayside." When we asked if the news his character was getting killed off came as a surprise, Lew Temple replied, "Three weeks, at the point in time when they called me, yes, I was like 'Really? I just started. Really? What about, let's kill Alan, that guy's a douchebag.' After you get the call, you do the appeal dance if you will. And then you figure out this is going to happen, and you commit to I'm going to make this a good departure for Axel. So I got three weeks notice, but that wouldn't be everybody's experience." When we asked if there was any chance that Axel could come back in some form of fashion, Lew Temple said, "You know what, I'm going to say there is a chance. I know that I've had conversations, and they've had conversations with me about the possibility of the prison riot, when it all went down, coming back to film that, a flashback scene if you will. I think they would have done better to do that if they had kept one of us to tell that story. But who knows? Maybe, they'll find that somehow or another." As far as what he's up to now, Lew Temple said, "Well, I have The Lone Ranger out right now, so I'm sort of sitting at the box office looking for fans to come out. It's a good movie, maybe not as attended as we all would like over at Disney." In regards to the upcoming Season 4 of The Walking Dead, Lew Temple said, "Looking forward to season four, it seems to me that it's going to be very mysterious, season four, lot of shadows to watch out for. So I'm still watching, you still watch, you follow me, right on."

The Walking Dead: Axel Could Return In Prison Riot Flashback