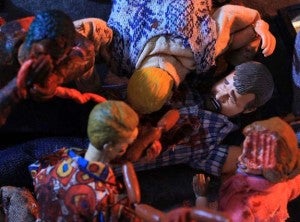 On the upcoming November 18 episode of Adult Swim's Robot Chicken, The Walking Dead creator Robert Kirkman will make a brief appearance, voicing himself, and the little Mego-style doll that looks like him will be swarmed and devoured by zombies, reports E! Online. "I know that I come out during some sort of argument and I try to talk about zombies for a little bit, but then I am swiftly eaten and devoured by a bunch of zombies," Kirkman told the site. "It's not the biggest role and I don't expect to be winning an Emmy anytime soon. But hopefully it will be memorable enough to have a lasting effect in the Robot universe." The creator, who also serves as a writer and executive producer on the AMC adaptation of his hit zombie series from Image Comics and Skybound, said that while it was fun to get in a booth and scream at the top of his lungs (while his animated self was being attacked), he won't be appearing on The Walking Dead. He said he has no interest in those Hitchcock/Stephen King/M. Night Shyamalan/Stan Lee-style cameos. "I find cameos like that extremely self-serving," he said. "I'm an executive producer on the show. I've got my name all over the show. I don't need my face all over it, too. It's not something I have any interest in doing." He added, "Being covered in a few inches of latex and being in the sun in Georgia doesn't seem like much fun to me."