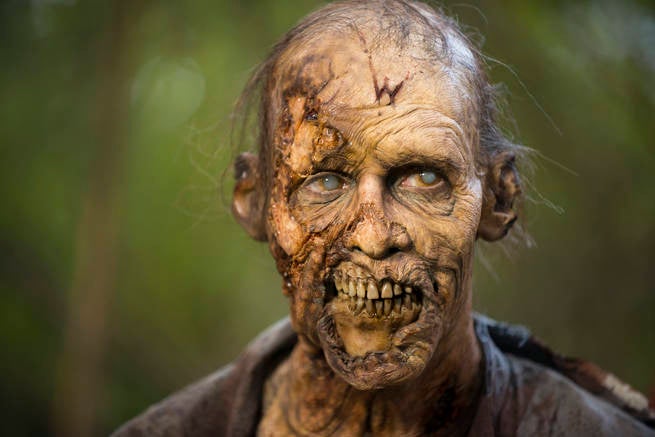 Throughout the second half of season 5 of The Walking Dead, we've seen various walkers with W's carved into their heads. First, they came in the form of limbless torsos popping out the back of a truck. Since then, we've seen various walkers around the Alexandria area with W's carved into their foreheads. Even Daryl, Rick and Carol noticed the phenomenon.

What do the W's mean though? While nothing is for sure, there is enough information to come up with a few theories.

First of all, there is the looming presence of the "Wolves." We don't know who they are and haven't been introduced to them, at least that we're aware of as an audience. The only way we've heard of them is by seeing "Wolves Not Far" spray painted on walls around Shirewilt, Noah's devastated neighborhood. The fact that the walkers have a W carved in their heads and their is a group called the wolves nearby is likely more than a coincide.

The first candidates, if the show is following it's comic book source material, is the DC Scavengers. The Scavengers are a group of bandits who don't meet the standards required to live in the Alexandria Safe-Zone. They arrogantly try to attack the community and force their way in but are swiftly eliminated by Rick and his group, with Andrea in the bell tower sniping them.

The DC Scavengers don't get too many details to their credit in the comics, so to rename them the Wolves and create this W on foreheads story seems like a stretch, so my guess is that the Scavengers are not the Wolves.

Then, there's everyone's favorite villain: Negan. Negan is the brutal, foul mouthed leader of the Saviors in the comics. It seems more likely the W's, if tied to the Wolves, will belong to the Saviors. Negan's group chains walkers to their Sanctuary and has used them as weapons before, so it's entirely possible that the Saviors are being renamed the Wolves to keep us guessing. They could mark the walkers with W, as if to psychotically say that those walkers belong to the Wolves.

Of course, there's the chance that the W's are part of the comic books latest group, The Whisperers. The Whisperers mask themselves with zombie faces and walk among them living without any sort of humanity. Although it didn't happen in the comics, it would seem sensible that they mark W's on walker heads to alert their fellow whisperers that this walking body, is in fact, a zombie. It feels unlikely that the W's relate to the Whisperers because this group doesn't come into play until Rick and the group have been at Alexandria for several years.

Last, there's the most far-fetched theory in my opinion, although it's not impossible. Maybe the W's aren't W's at all. Maybe they are M's. We know Morgan is lurking around somewhere, courtesy of some post credits scenes in the first half of the season. Is he marking upside down M's on walker foreheads, somehow? Last time we heard from him, he seemed pretty crazy, so you can't rule out that he's somehow getting walkers laying down or upside down and marking an M on their foreheads.

What do you think the W's on walker foreheads mean? Who or which group do you think is responsible for the markings?

The Walking Dead: Everything We Know So Far About W's On Walkers