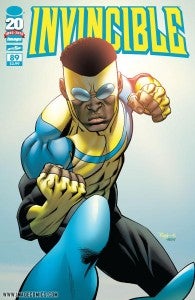 During a recent interview with ComicBook.com about the upcoming hundredth issue celebration for his long-running, creator-owned series The Walking Dead, writer Robert Kirkman took some time out to talk about his other fan-favorite Image series, Invincible. For the last few months, the title character has been replaced by an African-American lead who has taken on his name and costume. Originally, this came about as original series lead Mark Grayson had been laid up in a coma but now that he's out, he hasn't taken back the costume (at least yet--solicitations seem to suggest that he might not be thrilled with the job his replacement is doing). Unlike many similar situations (such as when Renee Montoya replaced The Question or Jaime Reyes replaced The Blue Beetle, just to name two), fans have by and large not been up in arms about the change, and it seems that, at least in part, it's because of the strength of Kirkman's supporting cast. Mark Grayson was the title character of a solo book, but it functioned so much like a team book that the Guardians of the Globe spinoff that has been published intermittently for the last few years seemed like a no-brainer when it was first announced. Pressed whether he thought from the get-go that Bulletproof could make the upgrade to Invincible, though, Kirkman told us that he never really considered it until the story pushed him in that direction. "All of the characters that appear in Invincible are important," said Kirkman. "While I didn't have a plan early on to replace Mark Grayson as the lead in the series, I always strived to make all the characters interesting enough that they could carry the series for an issue or two if need be." Of the idea that Invincible can (like his Image Comics stablemate Savage Dragon) be replaced and the title still carry on, Kirkman said, "I love the idea that Invincible is more about the world he lives in than he himself.  That way myself and the kick ass creative team Ryan [Ottley], Cliff [Rathburn], John [Rauch], Rus [Wooton] and Cory [Walker] get to do cool, random stuff from time to time to shake things up." But with two television shows (The Walking Dead and Thief of Thieves) that are not only demanding his time but also presumably putting additional pressure on the writer to keep those books fresh and interesting (not to mention the madcap awesomeness that is Super Dinosaur) , is staying aboard his superhero epic worth it? Kirkman was unequivocal: "Working on Invincible is a blast," he said.

Walking Dead Creator Kirkman on Invincible: "Any Character Can Carry An Issue"