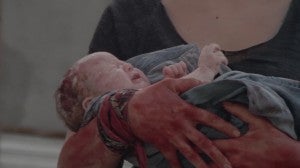 There are a number of theories out there as to the fate of Rick Grimes and his band of survivors coming out of tomorrow's season finale of AMC's The Walking Dead, and we don't know any more than you do about the answers. What we do know is that they should give young Judith Grimes a chance--and it's not for humanitarian reasons. As heartless as it sounds, there's a big part of me that would rather see the baby gone because it's more like the comic book source material. In this case, though, an opportunity has presented itself that I believe the writers and producers of The Walking Dead should seize. Remember, if you will, back when Geoff Johns left The Flash. The first time, we mean. Mark Waid was brought into the series, featuring a character who had been intended to have his happily ever after, with a pair of twin infants just born to he and his wife. The poor handling of the next hero to be The Flash compelled DC to bring back Wally West, and now Waid was stuck with a pair of babies in the book. He handled it the same way many writers do in the same situation--by creating a story where the kids jump forward in age. Sometimes it's just a simple time jump, sometimes it's something more complex like the Speed Force mojo that Waid used. And in the case of The Walking Dead, there's a distinct possibility that it won't be a change to Judith, but a removal of her by killing the baby off, that offers a way to change the narrative. The problem presented is that it's challenging to write babies in a way that advances the story. They can't be a part of the story, really, since they can't talk or walk around under their own power. They have needs that have to be tended to, and it would be distracting in the context of an adventure story like The Flash--or a survival story like The Walking Dead--to have to stop what you're doing to change a diaper or feed a baby so that s/he'll stop screaming. And that's why The Walking Dead should keep Judith around. Writers and fans always worry that kind of disruption is going to break up the action, stall the plot or rob other characters from their time in the spotlight--but the show prides itself on being a "realistic" take on the zombie apocalypse where "anything" can happen. And in reality, babies are difficult. They're difficult for parents and day care providers and too often, they're simple for writers because the unimaginative way out is rarely questioned. There's really only one way you can benefit from killing off Judith, and that is that you give the central cast something collectively mourn, and they grapple with the loss of the hope for the future that a baby born into the chaos of The Walking Dead has been written to represent. The mourning, though, will be just as effective with any other character in this close-knit group, whereas few others will force the writers to challenge themselves and flex new creative muscles the way Judith will. And that would be nice to see - not only is it uncommon for newborns on television to be played for anything but laughs (see the cheap-and-easy comedy of something like NBC's Up All Night), but the writers on AMC's The Walking Dead have rarely challenged themselves or their audiences in the way the Robert Kirkman does in The Walking Dead comic books on a consistent basis. On top of that, if they were to try and get some mileage out of the "loss of hope" angle, it should be done at a time other than the season finale, so that the fans, the writers and and the actors feel more closely connected to the death when the next episode comes on--and so there's no chance that Chandler Riggs grows a foot in the off-season and a time jump is needed, as they did at the beginning of season three. Speaking of time-jumps, the temptation to suddenly say, "Okay, it's five years later and Judith can talk and be taught to shoot" should be avoided at all costs. Not only is it the lazy way out, but you get all the negatives of having a child--someone who can't hold their own, is disruptive to the larger plot and needs to be constantly rescued--without any of the positives mentioned above--that it would be different from anything else on TV and force the writers to challenge themselves.

Why The Walking Dead Should Keep the Baby