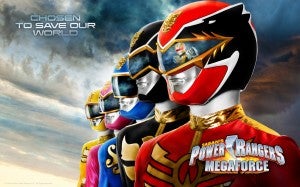 An upcoming episode of Power Rangers Megaforce will feature at least ten cameos from generations of former Power Rangers as part of Saban's effort to recognize 20 years of the popular kids' action franchise. Unfortunately, what seems to be last-minute changes to the plan and a very small budget for guest appearances have left a number of former stars out of the mix, either by design (they weren't invited) or because they declined the offer to film in New Zealand for not a lot of money. "We had been entertaining the possibility of past Rangers joining us for the longest time and didn't think it was possible to do. Due to so many requests from a number of past Rangers (as well as an overwhelming amount of requests from the fans, too!) we, as a production, talked it over and agree that it is a fabulous idea that we would like to make happen. This is also a wonderful opportunity to acknowledge all of the loyal fans and thank them for their support over 20 years. We want this to happen and we want as many of you as possible over here with us!" the producers say in what is purportedly a leaked e-mail sent to former Power Rangers stars. "Next comes the nitty-gritty of organizing such a task. The unfortunate reality is that including past Rangers was not part of our original budget. In order to include as many of you as possible in this shoot, we do not have massive funds at the individual level to offer each of you. We do hope that you bear this in mind as you consider our offer." They emphasized in the e-mail that in spite of that, they hoped past Rangers would join the shoot, appealing to their loyalty to the fan base. As yet, a Power Rangers fan site claims that Jason David Frank, Danny Slavin, Melody Perkins, Reggie Rolle, Selwyn Ward, Sean Johnson, Hector David, Jr., Brittany Pirtle and Jason Faunt are "confirmed" to guest on the episode, with more invitations already out and Saban waiting to hear back from those actors. You can check out a more complete set of details on who was invited and who wasn't at the RangerCrew blog.

Power Rangers 20th Anniversary Episode to Be Packed With Cameos