Few Rangers are more popular than the Green Ranger, and that has resulted in a variety of slick Cosplays, including this phenomenal one from Soni Aralynn.

Aralynn is an award-winning Cosplayer who's been making her own costumes for over 10 years, including a fantastic rendition of the Green Ranger from Mighty Morphin Power Rangers. The costume is based on the original Mighty Morphin design but features a twist. The role of Green Ranger was played by Jason David Frank, but Aralynn added a skirt to the costume (like the Pink Ranger wears), and it looks amazing. 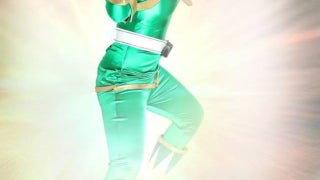 The suit is as bright as you remember, and the helmet looks like it came right off the set. In fact, this costume is actually a bit better than the original Mighty Morphin version. The reason being that the Green Ranger's armor was pretty impressive in the Super Sentai footage, but in the American footage, the Dragon Shield looks incredibly flimsy and not really like a shield at all. Aralynn's version is much closer to the Super Sentai version, and even has some weathered effects on the diamond for good measure.

The suit looks so stellar in part due to the photography of Yassir Ketchum Photography, Superhero Creations, and SCH. All three manage to make the costume stand out, adding cool effects like the Command Center, Zordon, the Dragonzord, and Alpha 5 in the background.

Aralynn changes things up a little in one particular photo with Eric Ward Art. In this photo, she keeps the green skirt but takes away the pants. Energy can be seen emanating from the golden dagger she's holding, indicating perhaps an evil Green Ranger has taken hold once more.

You can view the morphinominal photos in the gallery.

You can find more of Soni Aralynn's work on her Facebook, Big Cartel, and Patreon Pages.

For more photography from Yassir Ketchum Photography, you can head over to Facebook. You can find Eric Ward Art on Facebook and his official website. As for Superhero Creations, you can find them on Facebook as well.

Make sure to follow @MattMuellerCB for all of your Power Rangers coverage!

'Power Rangers': This Green Ranger Cosplay Will Make Your Week