Boom! Studios recently released a captivating live-action trailer for the first ever Power Rangers comic event, Shattered Grid, and fans were excited to see a surprising Jason David Frank portray the figure that sets it all into motion, Lord Drakkon.

Comicbook.com was lucky enough to talk to Jason David Frank about his surprising debut as Drakkon, and not only did he and his team share a behind-the-scenes look at the trailer, but also tease a much different Drakkon that fans are used to.

Frank was just as excited to work on the trailer as fans were to see it, "We just wanted to make something for the fans, also for Saban, and also to promote the most highly anticipated comic book, in my eyes, from my world, because I'm in the Power Ranger world, is the 25th issue of Power Rangers, the start of Shattered Grid."

As for what Frank is most looking forward to from the event, "There is some really crazy stuff going on in that episode that when people read it and understand and they will piece these things together. And it's gonna be released on the 28th. And everybody will read will make sense of how this is all coming together with that follow up book." 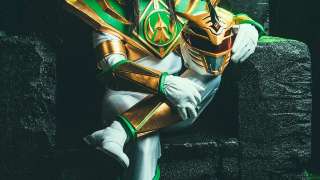 But putting the trailer together was no small feat as Frank remarks that, "Kyle Higgins really worked hard, I mean, night and day on it, and edits, and approving this. And I had to look at shots. Kyle's team and Kyle what he did as a director, even pulling the performance out of me. I know you look and there's like three or four lines, but Saban and everyone was, "Wow. We're impressed with your acting."

Frank's acting was impressive as fans were able to parse much more about the mysterious villain than ever before. That was the intention as well as Frank explains, "You only got three or four lines, but what I liked about it is the way mentally where Kyle put me into that spot was how we wanted to play Lord Drakkon, not an evil Tommy, or a Tommy under a spell. This is Lord Drakkon. I mean, he thinks he's the ultimate Ranger, that no one can hurt. This is his domain. He's the ruler, he's on top of the world. He's like the President in his own world, nothing phases him."

But Frank also further teased a very destructive Lord Drakkon moving forward, "[a]nd just watching all these other Rangers in disgust that these guys just didn't do what they should have done...now he's basically in to the timeline of destroying them all."

Mighty Morphin Power Rangers #25 lands in comic stores on March 28, and the synopsis for the event is as follows: