Hot Toys' Boba Fett figures keep getting better and better, and the deluxe version of Fett based on his appearance in Star Wars: Episode V - The Empire Strikes Back is their latest and greatest.

The main selling point of the deluxe version is Boba Fett's armor based on his "movie pre-production" look. The figure also includes a range of interchangeable parts such as helmet, jetpack, gauntlets, cape, and multiple gloved hands. The figure will be available to pre-order in the standard and deluxe versions at Sideshow Collectibles as early as today, January 11th. You can check out the full list of features for the deluxe figure below. You'll also find a gallery with additional images. 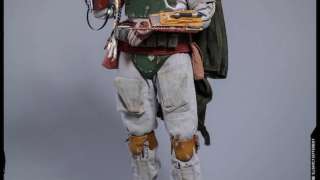 Weapon:
• One (1) blaster pistol with stock

Star Wars: Andor Theme to Have Slight Changes for Each Episode