While fans will have to wait for the sequel to The Last Jedi, they can find more of Rose Tico's story in the comics.

Rose Tico, who was played in the film by Kelly Marie Tran, was easily one of the breakout stars of The Last Jedi and will be getting the spotlight in two different comics. The first is the IDW Star Wars Adventures series, which will feature not only Rose but her sister Paige (via THR).

The story is titled Rose Knows, and will be written by Star Wars: Phasma's Delilah S. Dawson and drawn by Jughead's Derek Charm. The second story will take place in IDW's other Star Wars series Star Wars: Forces of Destiny, which will also be written by Dawson.

You can find the preview of Rose Knows in the gallery. 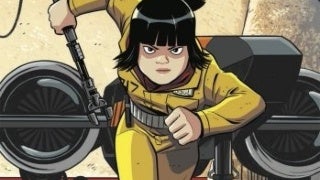 As you can see in the preview, the stories will also include other characters from the Star Wars mythos. Characters like Poe Dameron and General Leia will make appearances, and you can bet a few more familiar faces will show up along the way.

You can check out the first of these two stories in Star Wars: Adventures #6, which is in stores now.

As for Kelly Marie Tran, she was already a favorite before the film even hit theaters, and couldn't be more appreciative of the support she received from fans.

"The amount of support that I've gotten from people, even though they haven't seen me do anything, it means a lot and it makes me emotional thinking about it," Tran said. "I don't know that I'm deserving of that sort of support right away. And Mark Hamill and I have kind of talked about that and just how incredible it is to have people love something so much and then to be a part of it. I can't even describe it."

Star Wars: The Last Jedi currently holds an 81.50 on ComicBook.com's composite rankings, which you can submit your score for here.

Star Wars: The Last Jedi is currently in theaters.

Star Wars Grogu Tamagotchi Is Up for Pre-Order