Next week, Lucasfilm will finally debut its first spin-off from the Star Wars films. Rogue One: A Star Wars Story will tell the events between Star Wars: Episode III and IV as the Rebellion looks for a way to steal plans to the Imperial Death Star. Now, a brand-new clip from the film has been released, and it shows how fearsome the Galactic Empire is.

The clip features Mads Mikkelsen’s Galen Erso while he is being confronted by Director Krennic. The Imperial officer has come to retrieve Erso now that plans to test the Death Star have soured, but the latter seems unwilling to go with him.

UP NEXT: Is This Darth Vader Without Armor In Rogue One?

Krennica answers, “The work stalled. I need you to come back.” When Erso says he refuses to do so, the office then tells the weapon’s designer, “We were on the verge of greatness. We were this close to providing peace and security for the galaxy.”

Nonplussed, Krennic answers with this foreboding line. “Well, you have to start somewhere.”

From Lucasfilm comes the first of the Star Wars standalone films, Rogue One: A Star Wars Story, an all-new epic adventure. In a time of conflict, a group of unlikely heroes band together on a mission to steal the plans to the Death Star, the Empire’s ultimate weapon of destruction. This key event in the Star Wars timeline brings together ordinary people who choose to do extraordinary things, and in doing so, become part of something greater than themselves. 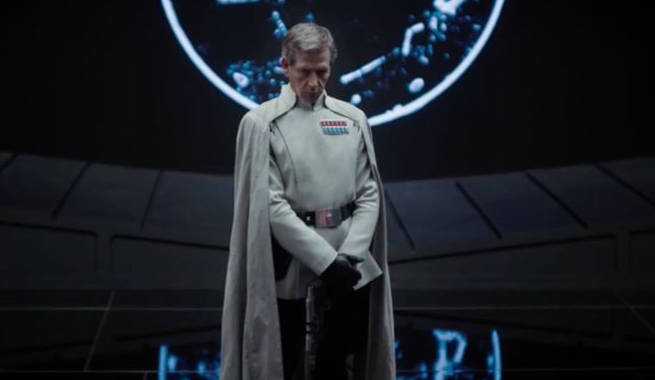 Rogue One: A Star Wars Story ‘Come Back’ Clip Released

Star Wars: An X-Wing Is Preparing to Land at the Smithsonian Museum