After months of mystery, fans are finally getting exciting looks at the upcoming Solo: A Star Wars Story in the form of trailers, posters, and photos. Pyramid International, who provides artwork for posters and various pieces of merchandise, has debuted new Solo images, which you can see in the gallery below. 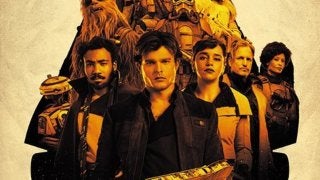 Board the Millennium Falcon and journey to a galaxy far, far away in Solo: A Star Wars Story, an all-new adventure with the most beloved scoundrel in the galaxy. Through a series of daring escapades deep within a dark and dangerous criminal underworld, Han Solo meets his mighty future copilot Chewbacca and encounters the notorious gambler Lando Calrissian, in a journey that will set the course of one of the Star Wars saga's most unlikely heroes.

While many of the other films in the Star Wars saga have debuted teasers and trailers more than a year in advance, Disney and Lucasfilm are apparently taking a much different approach with this chapter in the franchise, withholding promotional materials until much closer to release.

One theory is that, due to behind-the-scenes changes, the entire production was in trouble. With a reported weeks left of principal photography, directors Phil Lord and Chris Miller left the production with Ron Howard replacing them weeks later. This threw an understandable wrench into the works, yet Howard recently assured fans that everything is moving along as scheduled.

In response to Howard posting a photo of the film's scoring session, a fan replied, "Coming out next month and you still haven't finalized the film?? I have a bad feeling about this." Howard then assured, "Edit is locked. Score done. Right on schedule. Hope you check Solo out and find it fun."

Fans may have their concerns about the final product, yet Solo: A Star Wars Story will reportedly premiere at the Cannes Film Festival on May 15th, possibly confirming Lucasfilm's faith in the product. In 2005, however, the studio brought Revenge of the Sith to the prestigious festival, so we can't assume too much about the film merely because of a festival debut.

Solo: A Star Wars Story lands in theaters on May 25th.

Do you prefer the official posters or these promotional images? Let us know in the comments below or hit up @TheWolfman on Twitter to talk all things Star Wars and horror!