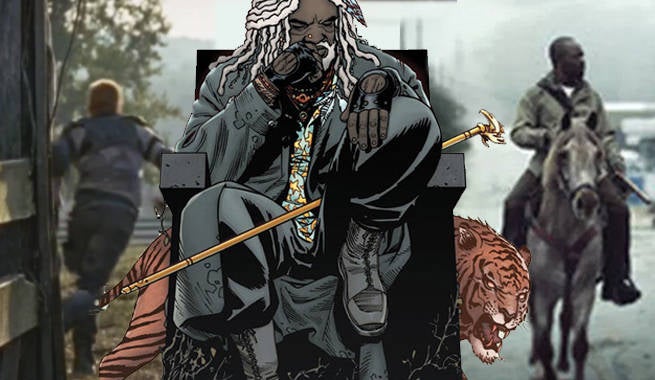 When The Walking Dead returns for its seventh season, the show and its world will only continue to grow. To date, the only characters we've met have been human. That will likely be changing.

The Walking Dead from Skybound - the account representing The Walking Dead comics - took to Facebook to celebrate National Pet Day. In doing so, they said, "you'll get to meet Ezekiel and Shiva soon enough!" However, on Instagram, a post which has since been deleted said that we'll be meeting the characters in season seven.

Posted by The Walking Dead from Skybound on Monday, April 11, 2016

If you're not familiar with the characters, Ezekiel is the leader of a community called The Kingdom. A former zookeeper, he keeps his trustee tiger, Shiva, with him. Shiva is immune to the zombie virus and destroys any threats that come near her master.

For more on The Kingdom - check out this article.

Speaking to a source involved with The Walking Dead recently, I was told that the showrunners were "trying" to bring Shiva to the show. Most signs are pointing to a tiger roaring its way into the trailer which will be released at the San Diego Comic Con panel for The Walking Dead in July.

The Walking Dead returns for its seventh season in October.

Ezekiel And Shiva Teased For The Walking Dead Season 7

The Walking Dead Game Will Be Free for Some Soon

Dead City's Jeffrey Dean Morgan: Negan and Maggie Might Kill Each Other "At Any Moment"