None of your Valentine's Days will compare to Rick Grimes and Michonne's. The apocalyptic power couple on AMC's The Walking Dead spent their Valentine's Day weekend mowing down zombies with cars and wires in truly epic fashion.

As Rick and Michonne's cars zipped down the road attached by a wire which was previously dangling explosives across the road, they sliced through so many zombies that it was impossible to keep track. Hundreds of new bicycle girls were made as torsos separated from legs and limbs were sent flying across the highway.

According to AMC's official The Walking Dead story sync app, the slicing of zombies is being counted as confirmed kills. As for how many walkers were taken out, not even the team involved with the show has an exact number, but they're crediting Rick and Michonne with over 300 kills.

The epic zombie kills were not originally a part of the plan for Rock in the Road. Executive producer Greg Nicotero directed the midseason 7 premiere of The Walking Dead and spawned the idea after reading the script. 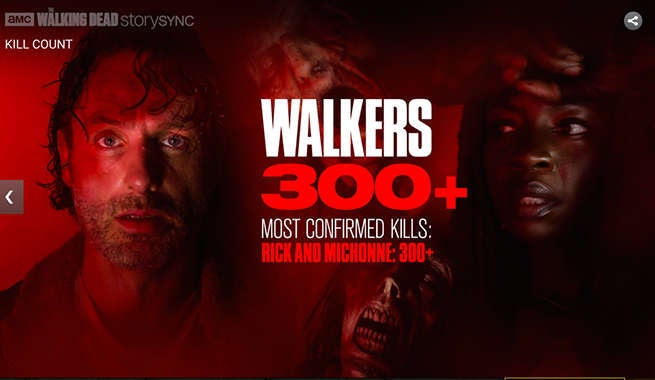 "It wasn't in the script," Nicotero told ComicBook.com in an exclusive interview. "We wanted the episode to have a big bang so when we come back, we were always coming back with a splash. We knew that we had a lot of pressure because of what we did last mid-season premiere, and we were like, 'How are we gonna top what we've done before?' The script, great script, basically it was written as they just push it, just a little too far. They're taking the explosives off the wire and the zombies surround the car, and then Rosita opens the sun roof and throws one of the explosives at them and it blows a hole in the herd and they take off."

UP NEXT: Where Is Father Gabriel?

It wasn't until they got to the set that Nicotero came up with the scene which would turn out as one of The Walking Dead's most memorable.

"Then we started working on it," Nicotero said. "When I read the first draft I was like, 'It's right there.' I said, 'If you guys would have had another day to work on the script you probably would have found it. This cable that's attaching the two cars. You have a perfect opportunity.'"

Showrunner Scott Gimple had to get on board. "I pitched it to Scott. I said, 'Let's have them hot wire the cars. As long as we can separate Carl and Tara and them from Rick and Michonne, it gives us a great opportunity to have Rick and Michonne do something together.'"

As for Andrew Lincoln, the man charged with playing Rick Grimes, he was as excited as anybody for the scene to come to life. "What I loved about that whole thing is that obviously Rick's getting his mojo back, but I loved the way we shot it and I loved the cars that we used," Lincoln said. "It felt like we were in some 1970s lone, low fi American indie movie. It was a pretty wild day. It was amazing. Then they called in all these drones."

It's Morgan vs. Virginia in Fear the Walking Dead 609 Trailer: "Things Left to Do"