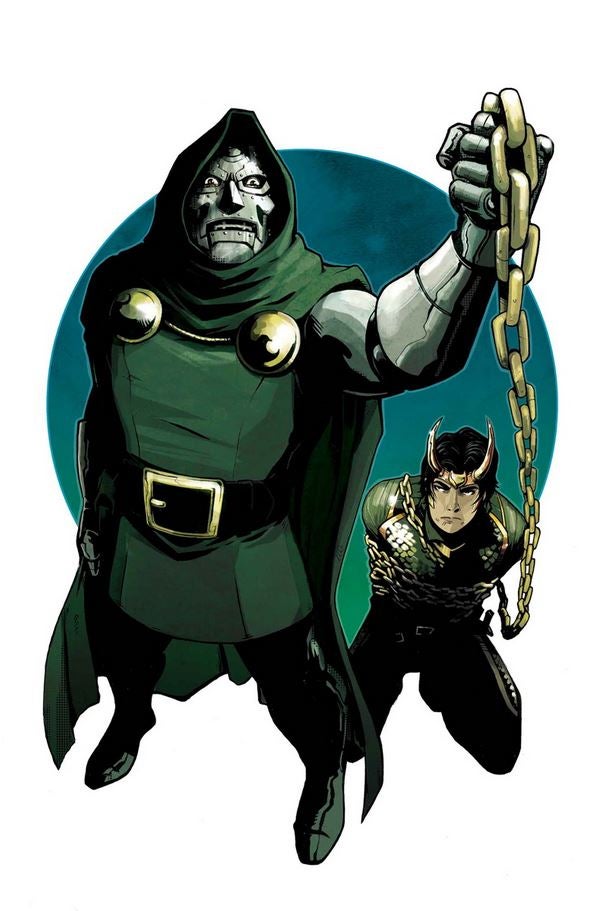 Doctor Doom may be the greatest villain in superhero comics. He is infinitely adaptable, comfortably moving between epic space odysseys like Secret Wars and minor misadventures with Squirrel Girl. Doom can be whatever a story requires.It’s no surprise that his inclusion in a series focused on Loki, another iconic antagonist, would be found brimming with potential.

When Al Ewing and Jorge Coelho reach the conceit of Loki: Agent of Asgard #6 it becomes something special. It takes a while to reach that point though. The first five pages of the comic are dedicated to exposition and backstory. The various events that place Loki and Doom into conflict have been strewn across multiple series, mini-series, and tie-ins. The recap page is a solid block of text that puts the beginning of Star Wars to shame. There are three asterisks within the first few pages as well, all referencing events that have occurred elsewhere. It’s a lot of exposition.

Coelho makes this introduction to the comic much more palatable. A sweeping post-apocalyptic vista combined with iconic incarnations of both Doom and Loki is a visual delight. A two page layout where Doom slowly crosses from background to foreground adds weight to the comic and invests the expository sequence with a sense of necessity. Coelho’s grasp of Doom and the moods he can evoke is clear from the start of the comic.

Once Ewing gets through the necessary preamble to his story, he dives directly into what makes this pairing of characters interesting. Doom and Loki represent a conflict between man and god. Their very existence follows drastically different sets of rules. In order for Doom to challenge Loki, he must understand how to defeat an immortal entity powered by non-logical forces. Doom addresses this line of thought directly. He walks Loki (and the reader) through his thought process and reveals the invisible workings of the story in which he exists. At a few points, Ewing comes close to breaking the fourth wall as Doom makes statements that could apply to the process of writing the story in which he exists.

Ewing also includes a story of two Latverian construction workers whose argument about the nature of man and god reflects upon the central conflict. Everything Ewing includes in this issue combines the basic conflict between two classic villains with a metatextual analysis of how these characters function. This direct address of story logic and the nature of characters within the Marvel universe might be the most clever way to handle a tie-in to the Axis event, where roles are inverted and altered.

The amount of dialogue included in this issue could have created a visually unappealing comic, one comparable to the endless walk-and-talk scenes of the Star Wars prequels. However, Coelho again ensures that each page remain compelling. He adapts his style to the various locales present throughout the comic from the broken future, to a New York apartment, and to Castle Doom itself. Even when entire pages are filled with dialogue, various elements, like an army of Doombots, add inflection to the points being made. The conversation is often mirrored in Coelho’s visuals and the comic is better for it.

Loki: Agent of Asgard #6 has a slow start, but the loads of exposition feel worthwhile when Ewing and Coelho reach the story they want to tell. It’s an interesting commentary on two of the most fascinating and long-lasting villains in comics. Like Kieron Gillen’s Journey Into Mystery, it manages to take multiple crossovers and tie-ins, and weave them into a narrative that is compelling all on its own.

10 Big Questions About the Arrowverse After Crisis on Infinite Earths