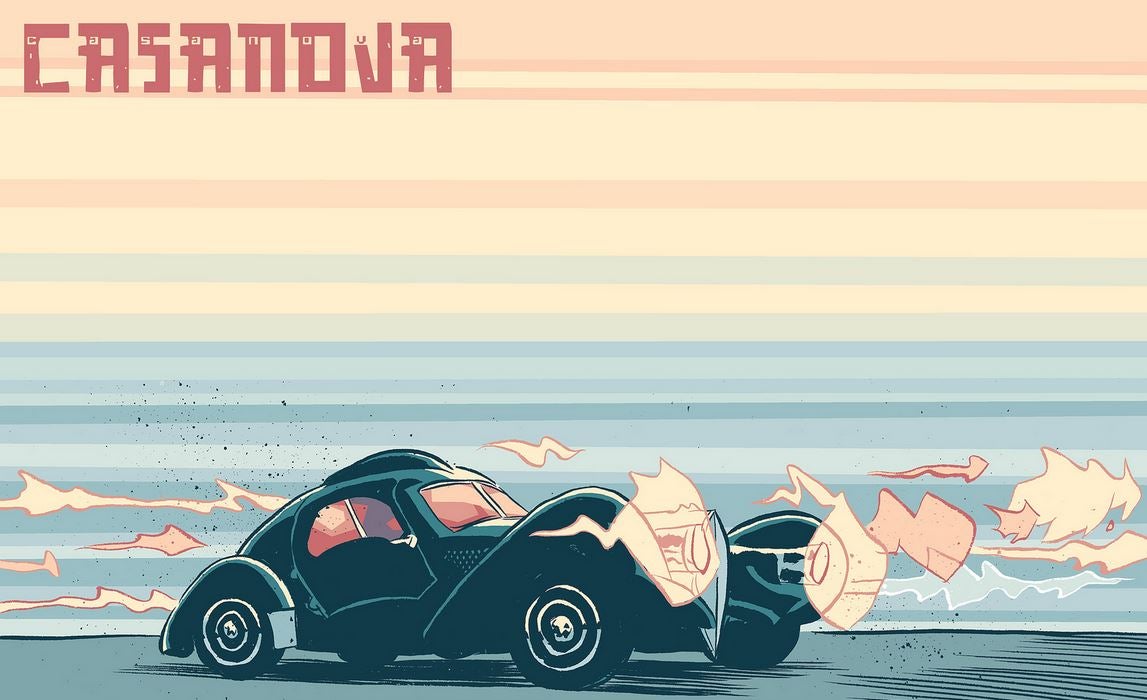 Together Matt Fraction, Gabriel Bá, and Fábio Moon have produced three of the most perfect volumes of comics in the 21st Century. Casanova is a comic that chews on pop culture, color, and feeling, then blows out a perfect bubble of comics language to exhilarate and expand the imagination when it pops. Casanova: Acedia, the fourth volume of the series, debuts next week and it’s every bit as good as what has come before it.

Fraction and Moon return to visit Casanova Quinn again in the story “Nine Days Now”. Quinn returns to the world as a shipwrecked astronaut with no memory of his past and knowledge of only three simple rules without any context to apply them. He quickly reestablishes himself in Los Angeles as Quentin Cassiday, the majordomo of a wealthy old man, providing him with information and favors (often in the form of murder). It’s super spy fashion and action via L.A. detective noir. You can taste the flavors of James Ellroy and Raymond Chandler subtly mixing with Fraction and Moon’s previous concoctions.

Fraction tells his story with his tongue firmly planted in his cheek. In the narration he openly winks at the reader more than once. At one point, he breaks from the action on the page in an attempt to explain a play on words that most readers will likely have missed. It’s a clever pun that is acknowledged as being an easily missed contribution, frustrating the writer. Letterer Dustin K. Harbin makes this sort of narration easy to dissect. He alternates between all uppercase and standard writing depending on whether it is Fraction as narrator or Casanova Quinn speaking within the text boxes. The result is a natural rhythm of text that never confuses itself or the reading experience.

Moon is well suited to the mood of this story. Although he and Bá share remarkably similar styles, Moon’s comes with sharper edges. He presents Los Angeles as a dangerous world where even the most pleasing invitations can quickly turn into a threat. Both the characters and setting feel like they could have been constructed with razors, fast lines and minute angles permeate the panels. As the plot begins to thicken and dangers become more prevalent, it is Moon who ratchets up the tension in every sequence.

There’s still the same amount of slick, sexy elements that readers of Casanova have come to expect from the series though. Instead of mad machines, space stations, or giant robots, Moon turns his focus towards chic Los Angeles housing, mysterious women, and cars. The car Casanova Quinn drives in this issue is something out of a dream. Moon blends power and elegance into a body that screams both, composed almost entirely curves. It’s a mechanical wet dream, and the sequence of Quinn driving it across L.A. will leave automotive fans drooling.

Cris Peter colors Los Angeles beautifully in that sequences setting smog strewn red and violet hues against the sleek black body of the car. His work throughout the entire issue seamlessly alternates between warm and cool palettes. At a nighttime party the world is composed of blues and pallid yellows with spots of red in the form of balloons for contrast. It’s cool in every sense of the word. That strikes a balance with the warmth of action and L.A. in the daytime that comes next. The colors of Casanova change the tone and pacing of the story breaking the comic into its essential components.

It isn’t until the end of the issue when Peter bounces the same bright red of the balloons off of intense blacks that the oddity and strangeness of Casanova stories begins to truly seep into “Nine Days Now”. Moon’s fashion designs and the word bubbles highlight a world far beyond the facade of the detective story or fashionable Southern California. It’s a place where anything can happen and it is exactly where this story is heading. This final sequence also makes for a powerful drive to push the story forward. Everything until this point has been a beautiful dream from the 1960’s, toying with readers and characters alike. This is the revelation that we have only witnessed the umbrella resting on the lip of a delicious cocktail, that we have not yet even begun to examine the intoxicating contents beneath it.

Michael Chabon, the author of modern masterpieces like The Amazing Adventures of Kavalier and Clay and Wonder Boys, is accompanied Gabriel Bá in the backup feature “Kawaii-Five 0”. The story is all about the experience and feeling of reading these images. In ten pages it jumps six weeks, wildly dropping characters, locations, and acronyms. It contains elements of science fiction and secret organizations, but it’s all about rock and roll.

It’s confrontation, sometimes as direct as a punch in the face and other times as subtle as a panther at night. It’s attitude throwing what people claim to want back in their faces. You can almost hear The Ramones tearing down CBGBs in the background. Chabon exerts humorous muscles delivering punchlines along with the punches. A back-and-forth between a rock critic and a street musician delivers a hilarious punchline.

It’s Bá who really owns this story though.  He makes the music that rolls through these panels come to life. The street musicians notes roll out of a stand up base like cigarette smoke, streaming into the night air. Her body as she performs and interacts with the critic is all confidence and gusto, creating a sex-filled swagger that sings. The one splash page in “Kawaii-Five 0” nails the raw energy and madness of a rock concert. It’s wild, frenetic energy with lights and bodies gyrating. Peter’s warm colors roll up the page from the darkness of the audience like a catching fire.

Casanova: Acedia #1 is 21st Century comics distilled to their purest form. It is two writer-artist teams with impeccable resumes telling stories exactly how they want to tell them. Words and images fuse together to prod at reader’s brains, cajoling them from their standard routine of skimming panels into a much more active process. Much like the femme fatales that Casanova Quinn encounters, it is a comic that is alluring, but one that demands you work to get close, and even when you do there’s no guarantee of a safe or comfortable experience. It teases and chides you, so that when it’s over the only logical step is to return to the beginning and go again.

Casanova is back and it’s so damn good.